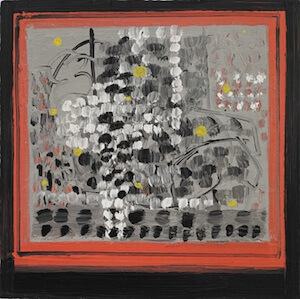 Sinéad Ní Mhaonaigh’s showing at the Kevin Kavanagh gallery reveals the latest phase in her dynamically evolving practice. ‘Contours’ finds her parked, for now, within a ‘difficult’ aesthetic that feels like an up-to-the-minute exploration of the parameters of painting. Working largely in the abstract idiom with referential accents, this has much to do with her distinctive palette and the dense, conflicted handling of her medium.

Ní Mhaonaigh has been exhibiting solo for a decade and her paintings have transformed over time, not resting too comfortably at any given juncture. For a while they featured primitive forms, pared-back and charmingly awkward. These works demonstrated an exciting instinct for colour – sometimes brassy, sometimes subtle – and delivered an instant aesthetic hit.

The transition from there to a condensed, even murky application of paint continues to provide the artist with room for manoeuvre. Although the exhibits in ‘Contours’ are all recent and untitled, they carry forward elements of her visual arsenal in diverse combinations. The works sit well in the gallery’s understated setting, and are individually quite immersive. More difficult to read from a distance than their forerunners, they invite the visitor to engage in up-close scrutiny, looking both at the surface and beneath it.

The accompanying text suggests that they emit a “potent optical charge”, which implies immediacy, a quick response to something unexpected. The potency is there, but it is slower and more elusive. What is immediate is the way in which Ní Mhaonaigh negotiates the act of making. In places the paint is applied impulsively, wet on wet, before being scraped back systematically to compress any built-up layers. Elsewhere, it is laid down in grid-like arrangements, and left to settle in its own unstinting fatness. Scrapings are allowed to dry out here and there, creating intriguing formations. They are suggestive of flayed skin and seem emblematic of the physicality of the artist’s painting process. Together with passages of bold colour, they create a context and foil for the obscurity she creates within.

The word ‘contour’ describes an outline that represents the boundary of form, but can also refer to a meaningful change in a pattern of intonation. With the forms here defined by lines that seem transient at best, timeless geometric shapes are once more meaningfully contested. Diamonds, circles, squares and rectangles, whole and partial, teeter on the verge of collapse in balanced but unstable compositions. Fleshy pinks and acidic yellows, unconventional colours that play a supporting role to dominating greyness, underscore the resulting unease. Where they interact with the monochrome, which at times seems almost to weep, they are dragged, obscured or flattened, leaving small occurrences of vibrating hues, a reward for close inspection.

Untitled II is ‘decorated’ with daubs reminiscent of painterly brushwork, but without the formal intention. These are applied differently to the randomly placed yellow dots, which appear to have special significance and are administered in a deft circular motion. One of my favourite exhibits is Untitled IV, which offers a pleasing interplay of colour – black, acid greens, oranges, reds, smoky greys and clotted-creamy white. These are contained within a thickly painted black frame (with irregular grey interventions that stop it from being too contained), and concentrated within bands that have been scraped upwards and sideways to create a chequerboard effect.

A duo of works, Untitled VII and VIII, revisit an earlier format and come closest to being representational. Easily interpreted as trees and hedgerows viewed from a moving vehicle, they reference Gerhard Richter’s photographic ‘blur’, which for Jörg Heiser “performs doubt as tremor”. (1) Interestingly, one is distinguishable from the other by superimposed dots which restore it to the abstract.

An overriding feature of this phase of Ní Mhaonaigh’s output is that it is laden with contradictions, not just in the obvious juxtapositions but in the interval between what it is and is not. The work is decorated, but not decorative, coloured, but not colourful, expressive yet methodical, abstract yet referential, seductive yet repulsive. This seems an appropriate visual expression for a conflicted age: one that engages with disorder at the same time as it strives for perfection.

Above all, it seems, ‘Contours’ is about the process of producing paintings, enriched by the fragments the artist has left within them. Sinéad Ní Mhaonaigh is to be commended for the exploratory nature of her practice and her reluctance to pursue an appealing formula into a commercial dead end. Some will be repulsed by the resulting physicality, some seduced by the ‘poetic’ ambiguity, but whatever the response, given her ability with colour and form, it will be interesting to see what happens when she next moves on.

Susan Campbell is a freelance art writer and artist.