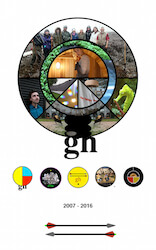 The Good Hatchery would like to announce that after 9 years of ambitious, experimental and in-depth work in the boglands of North Offaly, the residential studio project and art space at this location is now coming to an end.

The Trout Hatchery at iDeath was built years ago when the last tiger was killed and burned on the spot. We built the trout hatchery right here. The walls went up around the ashes.

The hatchery is small but designed with great care. The trays and ponds are made from watermelon sugar and stones gathered at a great distance and placed there in the order of that distance.

The water for the Hatchery comes from the little river that joins up later with the main river in the living-room. The sugar used is golden and blue.

There are two people buried at the bottom of the ponds in the hatchery. You look down past the young trout and see them lying there in their coffins, staring from beyond the glass doors. They wanted it that way, so they got it, being as they were keepers of the hatchery and at the same time, Charley’s folks.

The hatchery has a beautiful tile floor with the tiles put together so gracefully that it’s almost like music. It’s a swell place to dance.

There is a statue of the last tiger in the hatchery. The tiger is on fire in the statue. We are all watching it.
– RB.