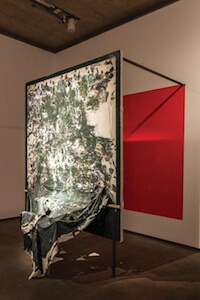 Susan Connolly
Something About Some Thing To Do With Paint
9 May – 22 June
The MAC, Belfast

For work so rooted in surface and medium, Susan Connolly’s ‘Something About Some Thing To Do With Paint’ makes surprising use of light – translucency is the first taste of the exhibition space.

Upon descending into the MAC’s sunken gallery, the soft red light falling through and backlighting R/Y/B Fluorescent catches the eye. The translucent canvas has a surprising delicacy among all its hardware: like all three works it is heavily spot lit, sitting away from the wall’s surface with a steel ceiling mount. The layers of acrylic and household paint that were built upon the canvas are scored and peeled away by Connolly in a single curtain, which trails on the ground like a fabric train.

Connolly likes to use circular motifs, and in R/Y/B Fluorescent, carves them with lines that radiate from the top of the canvas. The emerging vibrant fragments of the shapes, arranged in this layered pattern, looks like a burst of activity; with its acrylic negative, it resembles a dividing cell – and the painting does indeed seem to halve with this action, rather than replicate. With opposing tertiary and neutral colours smeared with one another and flecked with incidental lumps and remnants, as meticulous as the work’s process appears, it seems to embrace the unplanned as much as any formula behind its pattern.

C/M/Y is not as delicate as R/Y/B fluorescent; its red background is a painted square instead of cast light, and it glares around the backspace of the canvas. Steel supports from the wall trace the background cube, and its peeled surface is raised with a small support, half-offered. Its whitewash creates pastel moments, yet this work seems to have more touches of aggression than the last – the army green looks sanded beneath the white household emulsion, and the draped acrylic sheet has an odd canopy-like quality.

Doing away with support completely is Y,M,C,C,Y,M,M,C,Y,YMCCYMMCY,YMC,CYM,MCY. The parlance of image colour profiles and printed media in Connolly’s work hints toward her altering layering process, yet by being so overstated and enigmatic it seems to simultaneously poke fun at the idea of its colour process being of any importance. This piece is like a white sheet torn from the gallery wall, again composed of layers of paint. Some small islands remain and a cracked surface show coloured layers, some actually resembling the painted installations sited in the gallery in the past. I can’t resolve this logically, whether these pasts are new or used.

The backspace of Connolly’s work seems more like echoes and layers of the painting rather than a resolute placement in three dimensions. Yet whilst these pieces are considered strictly painting by the artist, all materials and supports are complicit to the whole work. In this way it sits slightly differently to other works that explore the canvas’s progression from window to surface to object.

The exhibition is not purely based on its process, or the straddling of two and three dimensions. Its deconstruction is not as abrupt and singular as Fontana, or as visceral and anthropomorphic as any Angela De La Cruz; nor is its pattern or shape as graphically rooted as Frank Stella’s 3D paintings. It touches on the paint’s physical resemblances – to fabric or skin or paper – but doesn’t do more than allude to them. It is the presentation of painting as a whole, rather than the physicality of the painting alone, that is used to explore the issues of objecthood in this work. The surface itself holds to its two-dimensional confines but the medium is pulled apart, delicately undone but heavily placed in the space.

One could read a kind of critique into the ripped walls and limp paint, but at the same time the work doesn’t seem to revel in its own destruction. It is not reliant on the state of undoing the paint, but rather the state of its placement, and the temporal nature of the medium. The dark borders of layered paint that remain and frame the sides of the stretched canvas remind me of Malevich, but inverted. Connolly’s work is less incidentally undone than the delicately cracked and elevated Black Suprematic Square; the paint here is an ‘impure’ medium, already distorted and embracing further alteration through its environmental conditions.

An exhibition of this nature can easily slip into a token update of traditional mediums. With no clear alignment to any particular painting tradition, ‘Something About Some Thing To Do With Paint’ avoids a redundant and ostentatious upgrade of the material. The work has a different contextual ground, and is perhaps more of an installational than a sculptural crossover. I feel this show says more about the physical and contextual support behind paint than the medium itself: with no overt reference when it obscures, wilts and degrades, the work will always be in the process of becoming or referring to something else.

Dorothy Hunter is an artist and writer based in Belfast. She is a co-director of Platform Arts and works from QSS studios, Belfast.