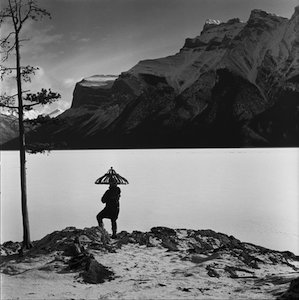 Water Conversations is an ongoing research project by artist Anna MacLeod. Over the past eight years MacLeod has travelled internationally to conduct research and engage in dialogue with artists and communities around the global and local issue of water as a precious and endangered resource. By focusing on material from four or five locations the artist has successfully negotiated the risky transition of her vast repository of works and projects into a visually effective and conceptually engaging representation of her practice at the Dock, Carrick-On Shannon.

In dealing with such an urgent and pressing issue, MacLeod opts for a narrative thread that is low key and prosaic – rather than catastrophic or overtly political. The show pivots around a range of hand-made apparatus and found objects purposed for various water-related functions. They are displayed alongside documentation of their use in performative and site-specific events from many of the locations. For a work made in the Canadian Rocky Mountains MacLeod fashioned an elaborate rubber and aluminium umbrella that resembles a miniature glassless Victorian botanic house.

In Colorado the artist assembled an umbrella from triangular planes of smooth plywood that rises and falls in peaks and valleys like a portable mountain range. From Almeria, Spain MacLeod has brought a series of poignant fan-like dew catchers made from folded wax paper. The pieces of apparatus are each wonderfully sculptural and esoteric, and bear direct and obtuse connections to a multitude of references that have impacted on water conservation globally. Mining, the commodification of resources, intensive agriculture and tourism are touched upon and counterpointed by the low-tech, sustainable, hand-crafted methods used by MacLeod.

As sculptural / functional hybrids it is not easy to decipher the ‘use’ of these objects. MacLeod leads the viewer to decode their cryptic purpose and operation while creating a psychological space in which to think laterally about water conservation while enjoying the fine elegance of her sculptural forms.

Also included is a striking film made in collaboration with filmmaker David Bickerstaff, which features MacLeod walking through a Canadian landscape with her rubber and aluminium umbrella. Projected onto the wall of a small annex off the largest gallery space, it sits alongside various props from the film. MacLeod awkwardly walks over terrain of Canadian lake ice and shoreline, mountainside and industrial roadside, while carrying the cumbersome and dysfunctional apparatus. The framing is deliberately sublime as MacLeod’s diminutive form traverses enormous backgrounds of jaw-dropping Rocky Mountain beauty. Somehow her peculiar and absurd activity (she also melts lake ice with a blow torch) is utterly sobered by powerful elements in the frame, the cold winter light over the transcendent landscape, the threat of melting lake-ice underfoot and the partially visible profile of an industrial complex puffing out smoke.

Underlining the gravitas, an uneasy soundtrack of outdoor silence is broken by raspy footsteps, passing cars and the hiss of the blowtorch. Hanging on the wall of the annex of the gallery space is a commemorative ceramic plate, which bizarrely celebrates past mining activity in the Rocky Mountains. Back in the larger space two museum / heritage-style still images from the film are reproduced in large format on opposing walls, with a battered 1970s canoe appearing as though it has run aground on the floor between them. There is a suggestion of re-writing history / archaeology from an alternative viewpoint in opposition to the sentiment of the commemorative plate.

In a second gallery space, MacLeod has brought research conducted in the desert regions of Almeria, Spain and the Gobi Desert in Mongolia. There is a shift in mood from the permanence and relatively tolerable nature of the Canadian mountains to these vast sterile landscapes that persist in holding out against sustainable habitation. On one wall the fragile paper dew catchers are accompanied by a heartrending song / lament to water in Ireland and Almeria. On the opposing wall a solitary monochrome work in matching script simply spells the word ‘AGUA’ over a hail of painted raindrops. They have a haunting plaintive quality that echoes the dream-like optimism of the modest dew-catching paper works.

On two opposite walls hang a series of botanical drawings etched into glass and hung out from the wall on hinges. The plants that are depicted were used in solar stills constructed by MacLeod to yield water in the Gobi Desert. These are exquisite works made in the finest tradition of forensic botanical drawing made all the more alluring by the glinting glass. As outlandish as it might seem, these wax-paper works and etched glass overcome their diminutive status through sheer beauty and bridges the extreme disproportion between MacLeod’s hand-made efforts and the gargantuan global need to conserve water. It is as though through purity, integrity and intelligent thinking that change can be effected through art and ideas.

Outside the main gallery spaces there is a wealth of additional material displayed in summary form through photographs and text. It gives a taste of the scale of MacLeod’s research and indicates the need for a second chapter of the ‘Survey of Works’. Particularly exciting is the portable water shrine from India and the solar stills from Mongolia. Anna MacLeod’s Water Conservations is a big-hearted project executed by modest means, and all the more powerful for it.

Carissa Farrell is a curator based in Dublin