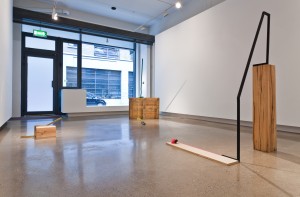 A while ago, a certain exhibition in the city of  Dublin was tentatively christened ‘Silence’. It arrived on the heels of a disastrous financial tumble – the kind that promises a season of ‘austerity’ – and prompted some objections. When the ground gives way, after all, and a system is so roundly proven inadequate to its citizens’ needs, many favour a more audible response.

A bit of time has passed now, and given that same exhibition was, in its more recent incarnation, a more exclamatory affair, perhaps a paced, lyrical meander is now the right medicine. For those who might sway toward this sensibility, Amy Stephens’ ‘Restless Nature’ at Oonagh Young Gallery is a lozenge for the hoarse throat.

Conveniently, the work’s reticence parallels that of Irish artist Caoimhe Kilfeather, whose sculpture is displayed in the LAB aroun

d the corner from Oonagh Young. The two harmonize in their suggestion of permanence and their formal obliquity, but diverge beyond that. If Kilfeather’s warm minimalism is a haiku, Stephens’ agnostic, intuitive
bricolage is a limerick, bounding with graceful unpredictability toward a crisp closure. She prioritises consistency while avoiding repetition, and the result is enjoyable to look at, in part, because it seems enjoyable to make. Though common sense denies it, the hopeful naïf within me thinks the artist might simply have worked until she got bored.

Stephens boldly exploits directional relationships.  The spires of her constructions jerk the gaze aggressively into the air, then crash back to earth to slink along the floor, or lob our attention across the room to the next work. The play of shadows around each piece scrawls grey angles along the walls that further exaggerate the exhibition’s halftone disruption of visual flow. A slight upward angling in the polished bronze of Strategic Calm, a modestly sized piece deposited unassumingly against the gallery’s right wall, bounces a subtle crescent of reflections off the wall’s surface. The light play, intermittently bright and dim, surrounds the compact piece with a vaguely graphic sunburst, a faint kind of Byzantine halo ordinarily reserved for saints in cathedral fenestration. There is, in instances like these, a strict but delicate attention to the formal periphery that only appears after looking for some time.

In this vein, th 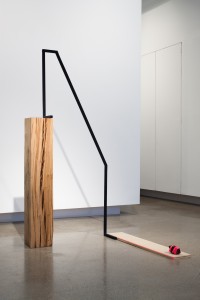 e small mounted photograph in the corner of the gallery is a pleasant oddball in a room full of comparatively assertive sculpture. But, along with the other allusions to the natural world, its contribution to the exhibition’s entirety seems inert. Stephens is British, but has been in residence at IMMA, and I can’t shed the suspicion that a shot like this represents another post-Willie Doherty nugget of obligatory bog-love. Invocation of the damp, overbearing wilderness provides a solid emotional hook (as the Twilight franchise testifies), but feels mutely solicitous when left unexplained.

Independent of these qualms, the photograph is striking. It was either taken at a very particular moment, in a field, during a vivid dusk, or edited in Adobe Photoshop in a very particular way. Suffice it to say, as with Stephens’ other work, there is a quiet purpose in every aspect. For this exhibition, questions of positioning and tone work best when they sidestep the answers.

Maybe it’s because the formal relationships are so tightly wrought and self-sufficient that the verbalized theme seems like an imposition. The combination of materials on varying strata of industrial refinement – raw oak, flock, bronze, and strips of neon-colored tape – and in cautiously specific measurements and orientations, lends Stephens’
work an aura of teasingly elusive meaning. What would breathe clearly with a cursory gloss and a sympathetically airy titling is compromised somewhat by an over-literalized reliance on the origins, physical and aesthetic, of her plastic approach. This is demonstrated in names like Shifting Ground and Riding the Fault Line, not to mention a
glut of text in the playbill. The title ‘Restless Nature’ seems unnecessary for an exhibition of work that takes advantage of split timber and the play of light on reflective surfaces, and contains such a clear sense of physical transience and tactility.

The author Saul Bellow saw art ideally as the “achievement of stillness in the midst of chaos”.1 How exactly that stillness is reached, and whether it ought to address the chaos, is endlessly debatable.  It is a complicated balance to manage that holy meditation in a swirl of distractions, and Stephens’ work does manage it, when undisturbed.  Where silence can exist, it might do so unheralded, and untrammeled, and be in its otherness a language of its own.