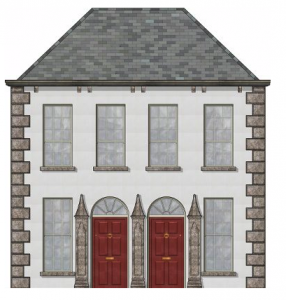 Ever dream of owning a house in Dublin? St. Patrick’s Close Developments presents ‘Real E-State’, an development of houses erected without planning permission and sold by auction.

I hadn’t realised the extent to which the public would seamlessly engage in the ‘Real E-State project’. It was difficult to describe; part installation, part performance; with visual and conceptual elements intertwined. An estate of houses was erected in Dublin, without planning permission, and sold on Friday 14 and Saturday 15 October 2011, by a professional auctioneer. In part, it was to challenge ideas about art and architecture, real housing and buying ‘off the plans’,and the virtual nature of the contemporary financial world.

It seems strange to think that anyone would want to own a conceptual home, yet the ordinary people who engaged with ‘Real E-State’ were absolutely committed to the idea.

The castellated walls of St Patrick’s Close were lined on both sides with house façades; the pitched top of the wall serving as the roof. A temporary outdoor office was erected at one end. As the news spread, that houses built without planning permission were for sale, many were intrigued and wanted to know more. There were several estate agents who showed people around, using the impeccably produced brochure to describe the attributes of the houses and their wonderful location. It also appeared in the Irish Times property section the day before the auction. Kevin Carroll from Savills Auctioneers explained the pricing of each house to the buyers. The value of the house was based on similar houses in the area and then adjusted from a square meter to a square centimeter for ‘Real E-State’. We arrived at the negotiable price of €25 per house.

The first to buy was a young woman and her boyfriend who were over from London. They chose their property carefully, with the help of a ‘Real E-State’ agent, selecting one opposite Marsh’s Library.  It had a lovely mature garden and a beautiful view of the library entrance. Watching and listening as they walked to the office, they were buzzing with delight at the thought of buying their first home together. For them, it was an official statement as a couple, and from the outside it looked like an emotional experience.

Another man came by on his way to pick up his child from school. He was local, easy going, yet instinctively tuned into business opportunities. He owned three houses in the area and he saw ‘Real E-State’ as an opportunity to add a fourth house to his property portfolio. He intends to frame his ‘Real E-State’ house and display it in his hall.

One of my favorite stories featured two retired sisters with a brother in Australia. They wanted him to move home but he couldn’t afford a house in Dublin. They came on both days of the auction to carefully, survey the houses, and, when they discovered the houses were not numbered, counted the 17th house from the start of the estate and bought it, as the number of their family house had been 17. The house was posted to their brother in Australia, so he would have somewhere to stay when he comes back to Ireland.

A friend of the Dean of St Patrick’s purchased house number one. He wanted a spot with free parking nearby for impromptu visits. Andrea Laurent bought a house with a big tree beside it to hang a swing. She was delighted at the prospect of living in such a beautiful leafy road so close to town. Natalie Weadick came along with her dog, George, and carefully selected a lovely house with an animal friendly garden. A father and daughter selected houses next door to each other, so they could meet every day but remain independent. Nicholas Gore-Grimes strolled down along the estate with Mark St John Ellis and, after being shown the properties by an agent, bought a house located in a beautiful, mature setting. Muriel McCarthy, recently retired after four decades as keeper of Marsh’s Library, brought a ‘Real E-State’ house to bring to her daughter in Wisconsin. 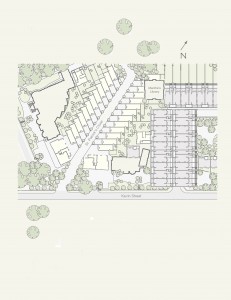 Each buyer was presented with the hand printed façade of the house.  The print was embossed with a bright silver seal reading ‘Real EState, St. Patrick’s Close, 273 sq centimeters’. This was signed by the artist-cum-agent Mary Ruth Walsh, then embossed with an equally shiny red notary seal and signed by the solicitor. Finally, it was stamped and signed by the auctioneer. The façade was then carefully folded like an architect’s plan, placed in an A4 silver envelope and handed to the buyer.

Another important area of ‘Real E-State’ was the creation of virtual house miniatures. I was influenced by Susan Stewart’s book On Longing: Narratives of the Miniature, the Gigantic, the Souvenir the Collection where she talks about an altered perception of time in small spaces. She describes a study from the University of Tennessee’s Architecture
Department. They found that people perceptually standing in a room scaled at 1/50 thought half an hour had passed after 15 minutes. When the scale was reduced to 1/25, people felt half an hour had passed after eight minutes. ‘Real E-State’ explores the implications of squeezing people and apartments into an ever reducing space, and the effect this has on our perception of time.

Adults, particularly older people, slipped into ‘Real E-State’ as naturally as a young child plays make-believe-house. The project had an engaging performative element, and the feed back indicated that the experience was one of aesthetic pleasure for those involved. However, I feel its strength lies in the carefully considered conceptual basis. These concepts are explored in Katherine Waugh’s brilliant essay ‘I’m Forever Blowing Bubbles’. It is an exceptional piece of writing: insightful, fantastically researched and laced with a rye wit that mirrors the tone of the project. Many of Waugh’s insights and challenges articulated my concerns and are linked to the history of the local area.

A second essay by the architect Dominic Stevens was specifically written and published in conjunction with ‘Real E-State’s’ brochure. It relates to housing in the city and advises the opposite to ‘Real EState’ one-off housing.

There is an important historical dimension to the ‘Real E-State’ project, tied in to its location. Jonathan Swift (Dean of St Patrick’s from 1713-1745) walked down St Patrick’s Close every day on his way to the Cathedral. In his series of pamphlets entitled Drapier’s Letters (1724-5) Swift warned people not to accept ‘Wood’s Coins’; worthless base metal coins minted in the UK for distribution in Ireland. He argued that the coins would devalue the Irish currency to an almost worthless level. The Irish Parliament records note:

‘The Irish House of Commons reported that the loss to the country, even if the patent were carried out as required, would amount to about 150 per cent…and accused the patentee of fraud and deceit.’

This sentiment could easily be applied to our present day economic crisis.

Swift eloquently described the worthlessness of base metal coinage using familiar examples. One genuine coin would buy you a pint of ale, while a weighty pocket full of ‘Wood’s Coins’ was needed to serve the same purpose. Three horse-drawn carts filled with ‘Wood’s Coins’ would be needed to buy a single horse at market. Swift promoted the idea of real silver and gold coinage and distrusted paper wealth, lampooning the South Seas’ stocks and shares investment (an economic bubble that led many to financial ruin).

I produced a previous work related to Swift. About a decade ago, I erected a small blue steel house, protruding from the wall of the National Archive Offices, on Bride Street. This street was also part of Swift’s daily journey from his house in Werburg Street to the Deanery. The construction was just below the size that required planning permission. The piece is entitled A Modest Proposal, in direct reference Swift’s 1729 essay. The house was put up at the beginning of the property boom and, as it has no windows or doors, is quite useless as a dwelling.

I see a clear parity between the financial problems of eighteenth centrury Ireland and the present crisis, both emerging from the introduction of ‘virtual’ wealth. Waugh presents this connection succinctly in ‘I’m Forever Blowing Bubbles’, comparing the South Seas debacle, which had disastrous consequences for Ireland, to our present day banking crisis and International Monetary Fund bailout. The parallels between monetary greed in the eighteenth and twenty-first century are striking.

While ‘Real E-State’s’ success was primarily conceptual, it was physically possible because I was based in Dublin in IMMA’s Artists Residency Programme. Past and present visual arts students from WIT Waterford were the ‘Real E-State’ agents while Ross O’Doherty, architect, drew up the exacting house plans for the brochure. Many others contributed particularly the Irish Architectural Foundation.

Of the 116 ‘Real E-State houses’, there are still some for sale, see www.reale-state.ie. For those who bought ‘Real E-State’ property, you have become part of an illustrious international virtual neighbourhood.  The list of buyers will not be disclosed, except for the few mentioned above, but, be assured, you are in good company. This story is to be continued.

Mary-Ruth Walsh wishes to thanks Katherine Waugh for her essay ‘I’m Forever Blowing Bubbles.’ For ‘Real E-State’ brochure containing the essay email:  realestate.stpatricksclose@gmail.com
This project has been selected for CUBEOpen 2011, Manchester, www.cube.org.uk