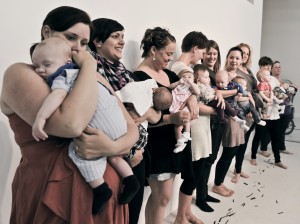 This interview was carried out long distance, with Johann Lundh and Aileen Burns formulating joint answers.

Marianne: The Context Gallery has acquired a considerable reputation in Northern Ireland and has seen changes in terms of space and directors. (Hugh Mulholland, James Kerr, Declan Sheehan, and Theo Simms). I served on the board of directors for eight years (2001-2009). What are your views on the gallery’s 18 year history?

Aileen and Johann: The core value, which has run through the nearly 20 year history of Context Gallery, is a commitment to supporting and promoting emerging artists based in, or from, the north of Ireland and beyond. We are in the process of re-imagining how the venue goes about this for the future. A great deal has changed in the city and in the field of contemporary art since the gallery was started. We are creating a model that we hope can carry the organization into the next 20 years.

What is the outline of your plans for the gallery?

One new element of the program will be annual themes. They are being introduced to give our audiences well-researched and timely exhibitions, which are clearly connected to the organisation’s public programmes and experimental initiatives. The themes are set by us, the Co-Directors, based on relevant concerns in Derry, Northern Ireland, Ireland, the UK, and globally. This is a strategy that has been successfully employed by major institutions such as CCA Wattis Institute in San Francisco and Witte de With Center for Contemporary Art in Rotterdam.

Additionally, we will be presenting at least three types of show in every calendar year: solo-shows, two-person exhibitions and international group shows. The two-person exhibitions are developed in order to give a young or emerging Northern Irish or Irish artist the opportunity to work closely with an international artist who has achieved significant success early in their career. This will allow both artists to expand their networks and give local artists insight into the working methods of some of their most acclaimed peers. International group exhibitions are curated to address a central aspect of the annual theme and bring together a Northern Irish, Irish or UK based artist with foreign artists, with the aim of introducing local artists to the international art community and by building networks through their participation. Another significant change will be an increase in the number and diversity of public programmes on offer through the organisation. These will include discursive events such as talks, symposiums, community-led education initiatives, and in-and-out bound residency opportunities for artists, curators and critics alike.

Derry has a number of important cultural spaces – the Playhouse, the VOID Art Centre (also directed collaboratively by Maoliosa Boyle and Colin Darke for a number of years), Verbal Arts Centre and Culturlann Ui Chanain (the Irish Language Centre) by O’Donnell Tuomey Architects. Do you plan to work with other cultural spaces in the city, particularly for the City of Culture 2013?

We are new to Derry and it will take time for us to build links with our colleagues at the Playhouse, the Void, the Verbal Arts Centre and Culturlann. It will be very important for us to create a programme and space that is in dialogue with and supportive of the initiatives at spaces like the Void. Already, during our two visits to the city, we have met with Maolíosa Boyle and Damian Duffy, to discuss their plans for 2013 and their ambitions for the organisation. 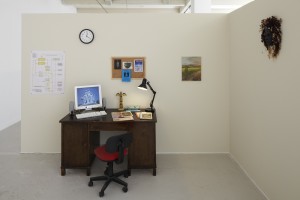 Since our mandate is to serve as a springboard for young and emerging artists, it is also important for us to build connections with institutions outside of Derry. We have started discussions with colleagues in Sligo, Dublin, Glasgow, and Berlin about ways in which our programmes can connect or travel outside of the city.

The Playhouse has a significant history and has been well renovated by Blonski Architects. Through renovations, the Context Gallery has been altered so that potential for traditional hanging and wall-based display is limited. How do you view curation of the gallery?

We are excited about the possibilities and challenges that our gallery space in the Playhouse presents us with. As curators we have rarely organized exhibitions that require substantial wall space and prefer to build exhibition architecture that suits the needs of each show. Therefore, the open and flexible nature of the current space will be
well suited to our practice.

A good example of the way that we have worked with non whitecube space is the show we co-curated at Stiftelsen 3, 14 in Bergen. ‘Stories, In Between’ featured artists whose time-based works trace and unpack complex cultural identities impacted by diasporas. The show featured new and recent works by Ethiopian/Swedish Loulou Cherinet, Venezuelan/Mexican/Spanish Patricia Esquivias, Kenyan/Canadian Brendan Fernandes, Brazilian/Danish Tamar Guimarães, Chinese/Canadian Will Kwan, Argentinean/Swedish Runo Lagomarsino,  and Brazilian/Norwegian Maya Økland. Rather than creating a series of clean black boxes to feature the works, we left the architecture visible and played with its features.

You have both previously worked collaboratively in London, Norway and Denmark. How do you approach this working relationship and what are the main benefits as opposed to an individual approach?

For Aileen, art history and cinema were at the centre of her studies at the University of Toronto and later at Columbia University in New York. Johan trained as an artist at Konstfack in Stockholm before turning to curating. Our different paths to curating have given us different ways of thinking about art and exhibition making. Our preference is for creating well-researched frameworks for exhibitions, which serve as the armature or point of departure for the art works that come to shape them. We prefer to work with artists to produce new works, rather than bringing existing works into dialogue with one another. This will be evident in our programme at Context. For example, we are hoping to launch a new stream next year entitled ‘Production Ireland’. It will be a highly publicized prize, and production opportunity for a young or emerging artist from
Ireland.

A recent example of how we like to work is a residency, an exhibition, and a forum, bound together by an online publication, addressing the future and ‘being together’. The project ‘Terms of Belonging’ featured Libia Castro & Ólafur Ólafsson, Kajsa Dahlberg, Luca Frei, Olivia Plender, Pia Rönicke & Nis Rømer, Superflex, Althea Thauberger, and Johan Tirén. We initiated the project in order to devote time, energy, and creative thought toward the question: How can we realize ways of sharing our world beyond the confines of nationalism? Participating artists came to Copenhagen for the month of August to produce or re-contextualize their work. The artworks in the show wove and altered social fabrics to enter into new and unexpected relationships with their collaborators and audiences. By fostering temporary communities, employing strategic separatism, or reframing social and legal contracts, the artists generated other modes of being-in-common.

Considering your background as art critics, this adds another dimension to your curation and allows for theoretical concepts to be applied to your curatorial practice. Can you comment on the benefits of this aspect to your work?

Writing is a big part of what any curator does. First we write to artists and engage them in a dialogue about making an exhibition. Then, we write grant applications with the aim of gaining as much financial support for that project as possible. And finally, we act as mediators or translators of that work, writing it into a social, historical, and artistic context. However, I think we both see our critical writing as distinct from our curatorial endeavors. It is a different tool that we hope to keep using in our new home!

I believe you are primarily focused on preparing plans for the City of Culture 2013?

We know what we want to do but will wait to unveil our programme until our new ‘identity’ has been revealed.

Marianne O’Kane Boal is a writer on art and architecture. She contributes regularly to: the VAN, Irish Arts Review, Perspective, Living Design and Architecture Ireland..