GRACE MCEVOY TALKS ABOUT LINK CULTUREFEST 2012: SERIES OF VISUAL ART AND MUSIC EVENTS, ORGANISED BY BLOCK T, THAT TOOK PLACE ACROSS THE SMITHFIELD AREA OF DUBLIN FROM 25 – 27 OF MAY.

LINK Culturefest was a BLOCK T initiative; a locally, independently run festival that aimed to showcase and celebrate the culture, art and people that make up the diverse community in Smithfield and its surrounding areas. Over the weekend, the festival hosted both local and international artists, musicians and curators in a series of events for the public. The three-day programme featured an Art Trail of exhibitions, live concerts, open studios, screenings, readings and performances. These events were hosted by a collection of cultural spaces and creative enterprises that are located between Stoneybatter and Capel Street.

The festival kicked off on the Friday evening with a launch, kindly opened by the Lord Mayor’s representative, Councillor Padraig McLoughlin, actor, Stephen Rea, BLOCK T’s Managing Director, Laura G Dovn and local historian, Noel Hughes. This launch was hosted in one of Smithfield’s vast vacant retail lots, which, for the period of the weekend, was transformed into a large contemporary gallery of over 4,000 square foot, hosting the work of over 100 exhibiting artists from participating local studios and two international partners. This showcase was a representation of the work being produced by local artists from some of Dublin’s oldest art studios such as New Art Studios, which turns 30 years old next year, to studio spaces that have only emerged in the past couple of months such as Loom, Satellite and Flatpack Studios. Other participating artists were representatives from BLOCK T, the Market Studios, Supafast, Visual Arts Centre, Brunswick Mill Studios, bio.space 033, Chancery Studios and Ormond Studios. The exhibition also included work from 20 international artists from Lisbon and Marseille who took part in an exchange programme for the period of the festival.

The three international partners involved in LINK Culturefest 2012 were Château de Servières in Marseille, Castelo d’If and Plataforma Revólver in Lisbon. This exchange was in conjunction with the 13th edition of the Marseille Open Studios (OAA: Ouvertures d’Ateliers d’Artistes) organised by Association Château de Servières, France. For almost 14 years, Château de Servières, one of Marseille’s best-known galleries, has successfully run one of the city’s most established artist residency programmes and the OAA. During the OAA, 44 artist studios open their doors to the public for three days, displaying their work and the work of their invited partnering artist. This event is a great way to meet new people, forge new relationships and to share and exchange ideas. Over 10,000 catalogues are produced for the OAA, promoting the work of each participating artist. These are distributed to the local and national galleries, artists, museums, critics and press in Marseille. Over the past four years, Château de Servières has focused on developing an international exchange programme. It is this initiative that led to the development of partnerships with Castelo d’If Associação, an organisation based in Lisbon, Portugal and more recently, in September of last year, with BLOCK T. All of the partnering organisations involved believe in artistic exchange and in the potential for collaborations between these three cities. BLOCK T is progressively involved in helping to develop international networks and considers this hugely beneficial to the development of an artist’s career. These exchanges offer up possibilities, broaden perspectives and allow for future projects to be established and developed. LINK Culturefest created a platform to facilitate this dialogue between art spaces and professionals in the local area, with the purpose of developing lasting national and international relationships across the cultural field. LINK will continue to focus on developing a model for an ongoing transnational exchange programme. 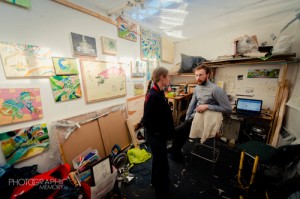 The weekend continued with a series of exhibitions throughout Saturday afternoon and evening. These exhibits displayed the work of both the Irish artists and their international partners and were showcased in the gallery spaces within the Market Studios (Unit H), Ormond Studios, Loom Studios, bio.space 033, BLOCK T and Supafast Building. The following day unfolded with an afternoon of open studios in a similar style to that of the OAA in Marseille and the studio spaces are also shared with their international partnering artists. This gave the artistic community in this specific area of the city the opportunity to network, showcase and forge new relationships with both one another and the public. Jennette Donnelly from Art for Art’s Sake kindly hosted a public tour of all these spaces over the weekend. The evenings featured live musical events such as the Mersk Collective and European Sensoria Band in one of Dublin’s most unique venue spaces and galleries, The Joinery, Arbour hill. Afro-Peruvian Jazz Band, Phisqu, Shane Latimer’s experimental music group, OKO, and Trinity Orchestra performing Radiohead played in St Michan’s Church, a beautiful venue that also hosted of the exhibition ‘Reflections’ by Mella Travers and Maeve McCarthy, RHA.

Pop-up events created specifically for LINK Culturefest took place throughout the weekend, including the performance X,Y Axes by Fergus Byrne, which looked at the process of making drawings through performative elements such as skipping and hula-hooping. Readings by Desmond Hogan, Hugh Fitzgerald Ryan, Adrian Kenny and Patrick Myler took place at The Lilliput Press. A series of screenings entitled ‘Surrounds’, were presented at BLOCK T’s new creative studio space, which featured the work of two filmmakers, Moira Tierney and Gregory Dunn. Tierney’s Ride City (Smithfield Square) is a short Super 8mm film based on the horse market fair in Smithfield. Dunn screened three separate works: The Lifeline Project (2012), a short film in which Kaethe Burt O’Dea discusses her proposal for a new, yet sensitive use for the once majestic Broadstone Railway terminus, Sole Man (2012), a story about Larry Donohoe, who runs a shoe repair business in Stoneybatter and Released (2012,) a short about ex-convict Larry Murphy who was released from Dublin’s Arbour Hill Prison in August 2010. The weekend finished with the bi-monthly performance event ‘Livestock’, an initiative of the artists at the Market Studios, which took place in Unit H on the Sunday evening and included participating artists Eleanor Lawlor, Joan Healy, Seamus Bradley, Vivienne Byrne, Michelle Browne, Catherine Barragry, Katherine Nolan, Niamh Murphy, Debbie Guinnan, Matthew Nevin, Ciara Scanlan and The Fathers of Western Thought. Other on-going exhibitions that took place during the festival included ‘Open Your Eyes’, a group show at Little Green Street Gallery, ‘New Work’ by Sarah O’Neill in The Complex, ‘Outside The System of Difference’ by Marie Farrington and Sarah Doherty in The Joinery, ‘Somewhere to Be’, a group show in The Lighthouse Cinema and ‘I Love Those Paintings’, a group show in Mother’s Tankstation. 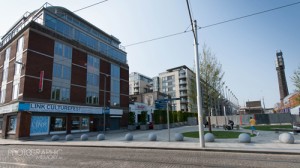 It is clear that there is a thriving cultural and creative community sprouting in Smithfield and its immediate surrounding areas, which is contributing and responding to its rich historical legacy in a vibrant and dynamic way. In recent years, Smithfield Square itself has been a site of redevelopment and although this re-invention may not have gone entirely as planned, it has allowed the area to become home to many of these creative initiatives that are leaving an impact on the conflicted cultural identity of the area. LINK Culturefest highlighted these quietly influential spaces altogether for the first time and brought them to the forefront of the public’s attention. The enthusiasm and energy that we were confronted with made it a truly collaborative effort in helping to put Smithfield and the surrounding areas on the map as a cultural destination. Support for the festival also came from some of the local businesses that worked with us in a collaborative manner, either through small donations or benefits in kind. We hope that all these links will be felt far beyond the weekend’s events and that the festival will continue to grow and develop in the near future.

Grace McEvoy is a co-founding member and Visual Arts Co- ordinator of BLOCK T. She was the Exhibitions Director for LINK Culturefest.