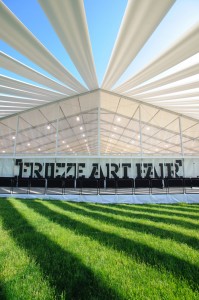 KATHLEEN MADDEN REPORTS FROM THE FIRST FRIEZE, NEW YORK, WHICH TOOK PLACE IN MAY 2012.

Uncertainty permeated the days before the first iteration of the Frieze Art Fair, New York. (Magazine publishers Amanda Sharpe and Matthew Slotover started the London version in 2003.) The Armory has been New York’s most significant contemporary art fair since its inception in 1994 but for years, complaints have been lodged concerning viewing conditions, which are far from ideal due to congestion on the relentlessly long and doggedly uninteresting piers. Poor food service and dismal facilities further hinder the experience and the Armory has struggled with retention rates for participating galleries. This year, the number was reduced from 270 to 220. Frieze is considered a direct challenge to the Armory. After the inaugural Frieze weekend, 4 – 7 May 2012, during which “180 of the most exciting contemporary art galleries in the world” assembled, the uncertainty was laid to rest, as Frieze proved a great success. Tickets sold out for both Saturday and Sunday. For the first time, Gagosian Gallery participated in a New York art fair, reportedly selling out their booth – paintings by Rudolf Stingel – very early on in the proceedings. Now, the question is whether New York will sustain both Frieze and the Armory. New Yorkers love a competition!

One of the most uncertain aspects of Frieze was whether people would go. Held off Manhattan Island in a place many had never heard of, Frieze landed just across the East River on Randall’s Island Park in a luminous white tent that snaked about a mile in length. However, getting there was not a problem, with water ferries running from Midtown and yellow school buses from 125th St connecting to the subway (the 4 / 5 / 6), as well as car traffic over the Triborough Bridge for which both private and taxi services were available. Foot-traffic can access the island and The Gallerist section of The New York Observer recently published a mocking article about the newly renovated 103rd Street footbridge that will appear just in time for Frieze 2013. Europeans delighted in taking the yellow school bus, though some Americans felt rather demoralised, recalling childhood bullying. Getting to and from the island proved manageable and 45,000 people attended Frieze 2012. Some collectors reportedly made repeat visits and sales were made after the VIP opening when clients returned to finalise discussions. Monday was a particularly brisk day for sales in advance of the spring auctions.

The bespoke 250,000 sq ft temporary tent housed over 1,000 artists’ works. Designed by Brooklyn architects SO–IL, it was as tall as a cathedral and its undulating serpentine curves meant the viewer never saw more than 50 feet in front of themselves, thus eliminating the visual exhaustion induced by spaces like the Hudson River piers where the Armory takes place. Instead, the atmosphere catered to the eye and made the art look good, while exceptional food from The Fat Radish on the Lower East Side, Sant Ambroese from the Upper East Side and The Standard Biergarten from the Meatpacking District, as well as a SoHo House pop-up space, catered to the palette. Additional comforts included posh porta-loos arranged around an outdoor courtyard and adequate space for people to meet and relax between viewings. New York gallerist David Nolan praised the “democratic” range, noting that the gallery selection was “better balanced than most fairs, and the atmosphere was great”. The power of the selection committee at art fairs is more prominent now than ever before. Choosing who gets in and ultimately what art is shown is vitally important to producing a well-balanced selection.

Two sections, Focus and Frame, enhanced this sense of balance: Focus was introduced at the New York fair and was dedicated to galleries opened in or after 2001 which presented up to three gallery artists; Frame was dedicated to galleries under six years old showing solo presentations. Along with the outdoor sculpture park and Frieze Talks, these innovative approaches made Frieze an outstanding experience that catered to the intellectual viewer. Despite this, several participating galleries did not fare as well. Some attendees noted that the middle-range collectors, especially those from Europe, were missing, perhaps kept away in anticipation of Basel, which takes place just over a month after Frieze, New York. To do well at the fair, gallerists have to be remarkably well-organised, which is challenging when galleries are doing, on average, seven fairs a year or more. Many spent the following week in Hong Kong for the fair there. Of course, the gallerists must also travel to their artists’ shows all over the world and to the major group shows such as Documenta, the Venice Biennale, Dublin Contemporary and the Istanbul Biennial, among dozens of others. The art calendar is becoming more and more crowded with art fairs and this is taking its toll. 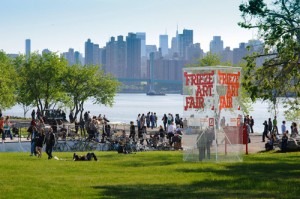 Some have said too many galleries were included at Frieze, and a smaller selection would be advantageous. Though not, perhaps, as few as Independent, the forum for art of 40 – 45 exhibitors, who install contemporary artwork in the former Dia Building on 22nd Street as if it were in an extensive group show rather than in booths that break-up the space. Independent positions itself as an anti-art fair selling event. It has taken place for the past three years during Armory Week, one of a dozen or so fairs that take place during that week in March. One of its founders, Darren Flook, of Hotel, London, points out the difference between now and 10 years ago, “If you have an interest in art and the resources there are so many opportunities – advisors, auctions, more fairs, online – they keep inventing new platforms for the distribution of art, but not inventing more collectors. Those are a finite group.” Appealing to those who attend these shows is vital for the career of an artist, as well as for the gallery that support and promote the artists. The importance of being visible dominates the art market and feeds the art fair model.

The major increase in art fair activity over the past two decades has resulted in art that is tamer rather than more daring. ‘Art-fair art’ has been ridiculed and deemed unproductive for the art eco-system; it is commodity art, it fits in a crate and isn’t necessarily part of an artist’s coherent conceptualisation for an exhibition. In the past, artists might have a major solo show each year with a primary dealer, perhaps another solo show somewhere else, but now artists are constantly being solicited for work to send to art fairs. This constant marketing for work at art fairs has caused many galleries to expand their staff, which comes at a cost. Since the business tends to intimate and idiosyncratic, artists are not able to bond with gallery personnel. Losing time in the gallery – to nurture artists – seems problematic for gallerists, but in the current market it is absolutely necessary. To be missing from the international art fair circuit is a larger problem.

Perhaps due to the proliferation of activity within the art world, the art fair is a self-fulfilling cycle of reassurance. They are vital for networking. London gallerist, Kate MacGarry was really excited about the fair and said she “felt like an export to America!” Some worried the British invasion threw up culture clashes. Perhaps the worst offense being the British resistance to extending themselves as readily as Americans do, elitism brushing up against the scrappy democratic spirit of most Americans . There was a noticeable culture shift as many of the American art workers – the press, art advisors, artists etc – eschewed the fair, feeling neglected by the administration, not extended invites or obstructed from access. The British don’t always extend invites to encourage mid-level players, which would help sustain the sales for the smaller, more risky galleries of Frame and Focus. But hopefully the overall success of the fair this year will help and improvements will be made to the 2013 version, which takes place from 10 –13 May. The question remains, with a full art schedule, does New York need another fair? Or will Frieze survive to supplant its predecessors?

Kathleen Madden is an art historian living in New York City. She teaches at Sotheby’s Institute and Barnard College, Columbia University and is currently producing a book and project on /with / about Carolee Schneemann for Ridinghouse, London.