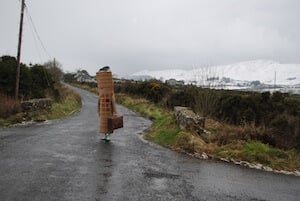 ALMOST FIT TO BE HUGGED

I met the Carpet Man first towards the end of 2011, during the opening of Thomas Brezing’s exhibition ‘The Art of Failure Isn’t Hard to Master’ at the Highlanes Gallery in Drogheda (12 November 2011 – 11 January 2012). There he stood, chaperoned by a gallery assistant but otherwise apparently helpless, his feet in an old pair of woollen socks and his outstretched arms the only things extending from his body – an old carpet – letting everybody know through text sewn on his torso that he was “almost fit to be hugged”. Brezing’s daughters were the first to try erasing that “almost,” eventually cajoling many of the other guests to follow suit. The Carpet Man hugged everybody back.

Where did the Carpet Man come from? Who is he? Why is he among us? What does he represent? In the course of an email interview / discussion I’ve been conducting with Brezing, one of his answers revolved around his current sense of removal from painting, which has been his primary practice for at least a decade. Without ruling out a return, he feels he has said everything he’s had to say up to this point through the medium, and is looking to “go through other experiences”. It has not been a surprise to learn that he particularly enjoys the physical act of making: his training in metalwork being primarily about craft, its focus on working with the hands rather than with the mind.

Clearly, though, the ‘Carpet Man’ project is strongly conceptual. And there’s a large dose of situationism within it (Guy Debord defines situation as “a moment of life concretely and deliberately constructed by the collective organization of a unitary ambiance and a game of events.”1) But both preparation and execution revolve around physical activity.

Here is an old-fashioned carpet. You cut it with an army knife to an appropriate size so that when rolled around your body the feet show but the head is covered; you also cut two holes for the arms to go through. You remove the straps from an old rucksack (one that may have gone everywhere with you in what now seems like a previous life, and which you’re loathe to take apart because of an emotional attachment to it, thus effectively enforcing a sort of severing from that past) and sew them onto the back so that it can be closed up. Then you try getting into it, having made sure you have someone nearby to strap you in. You are satisfied it fits an average-sized person. The material is thick and there are no gaps to see or hear through, thus disabling the faculty of sight completely while all that’s audible are muffled noises. Your movement is severely restricted, not only because you can’t see where you’re going, but also because your steps must necessarily be short.

About 15 years ago Brezing found himself in circumstances that forced him to move suddenly out of a residential space, and ended up for a few days sleeping on his studio floor. Lacking a sleeping bag, all he could do to keep warm at night was to roll up an old carpet and sleep in it. He has spoken about those nights spent inside that tube-like contraption in terms of feeling “utterly lost” and in an “extremely awkward” state, getting a glimpse into what it might be like to sleep rough. He describes it as “the low point” in his time as a practicing artist in Ireland, when he thought that “this artist thing” just wouldn’t work. A decade and a half later, those circumstances and some specific material involved (carpet, rucksack, army knife) became the seeds for a project marking a sort of renewal within his practice.

To bring the Carpet Man to life, the artist, who ordinarily embodies him, needs plenty of assistance (“a sign of things to come…”); I have helped bring about this incarnation several times, closing the straps at the back and leading him to locations he wants to occupy, either by the hand or with vocal directions. A potent sense of responsibility takes over: not only because what you’re doing is crucial to the work, but also because the artist’s physical safety can be at stake. The Carpet Man is near-impotent, and one ends up operating around him much like a carer. Several of the locations he chooses to occupy are rather desolate, often involving difficult terrain, abandoned sites or broken edifices. There have been excursions to the Cooley Mountains, Gormanston College, an unused beach and an abandoned house in north County Dublin, the artist’s attic space, a forest in County Wicklow…

Yet the Carpet Man remains a little shy. With the notable exception of his appearance at the Highlanes Gallery, Drogheda, he prefers to avoid the public, quite happy instead just to have his movements and actions documented. A film of his activities is currently in production, with a trailer shortly available for viewing. Supporting material has included a raft with a host of mini Carpet Men, an embalmed seagull (a symbol of the artist’s / Carpet Man’s environmental concerns) and an old suitcase which he carries everywhere. But he has let it slip that he is keen to shake off his fear of onlookers and audiences – that he’d like to meet more people and make more use of public spaces.

The collaborative aspect of making these documents provides a contrast to the isolation, even loneliness, evoked by the work itself. Brezing has often used discarded or unwanted material provided by a community of friends and colleagues, while his daughters have taken part either as unwitting providers of titles or as sound accompaniment. To make the film Carpet Man, he has again enlisted the help of many from this community. In particular, film editor Oliver Fallen has been on hand with a lot of technical advice.

A soundtrack giving voice to a text in parts written by Brezing himself, in parts selected from other sources, accompanies the visual material. Several individuals have been recorded, reading excerpts from the text, creating a collage of voices whose varied characteristics – their accents in particular – imbue the film with a disorienting, dreamlike effect. At times, these voices are laid over each other to bring about a choir-like sound, something akin to prayer.

“We put a four and a half minute long trailer together and every now and then a few words taken from a text I wrote would blend in and out, supporting the visuals. When the trailer was done, Oliver suggested we add sound at some point, which I had considered, in the form of a piano piece based on Mogwai’s Music For A Forgotten Future. I was going to let my eldest daughter, who plays the piano, strip the song down to its core tune, take that tune and improvise with it. I suggested we have a voice speak some of the words from the text I wrote as well. Oliver suggested having several voices speak together at once and do an overlay. This immediately appealed to me and reminded me of the time when I was a kid when I heard the voices of a congregation pray “Our Father…” in church together, my father standing next to me, with the deepest voice of them all – powerful moments in unity and togetherness. So, in different people’s houses I’m recording deep male voices as one part of the sound and female voices as part of another. Some voices sound beautifully vulnerable as if their personalities were laid bare through it, some other voices sound more controlled, self-conscious or matter-of-fact, but every voice has something captivating.”

Creating the Carpet Man started out as a stray thought, one that at first Brezing admits he was reluctant to pursue. And he maintains that, despite having already appeared in a gallery setting and been documented in photographs and on film, the character, as well as the project, is still very much a work in progress. The Carpet Man’s facelessness is a key element in his effectiveness as a piece of performance / conceptual / semi-public art: viewers and audiences are afforded the freedom to project thoughts and feelings onto this shell. Whenever he appears, the environment is altered for a brief period, and people respond to him in different ways. Mostly it tends to make them smile or leave them a little bemused. But it also brings out one’s caring side; in his clumsiness and in his vulnerability, in the fact that he is rather unkempt and looks quite lost, we recognise in the Carpet Man something close to home.

Christodoulos Makris is a poet and editor based in north County Dublin. His collections include ‘Spitting Out the Mother Tongue’ (Wurm Press, 2011) and the artist’s book Muses Walk (2012)