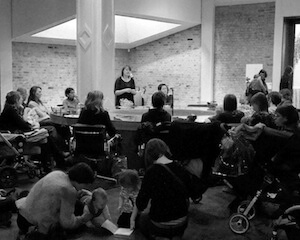 MARTINA MULLANEY DISCUSSES HER ONGOING PROJECT ‘ENEMIES OF GOOD ART’ THAT INTERROGATES THE INVISIBILITY OF MOTHERS IN ART PRACTICE.

There is no more sombre enemy of good art than the pram in the hall.  Cyril Connolly, Enemies of Promise, 1938

The above line was quoted to me during the summer of 2008, when I was about four months pregnant. I am an Irish artist living and working in London. After the birth of my daughter I initiated the project Enemies of Good Art in response to my frustrations around what I consider to be impediments to art practice for artists with children, such as: outdated views of artists with children by the art world; childcare costs; and the lack of public crèche facilities. Enemies of Good Art interrogates the invisibility of mothers in art practice. We believe that every artist has the right to practice; having children should not prohibit one from exercising that right.

In March 2009, while visiting the Goshka Macuga installation The Nature of the Beast at the newly redeveloped Whitechapel Gallery, when my little girl was about three months old, and seeing the meeting table the artist had installed, I imagined a large group of breast feeding mothers gathered around it so that we might talk about art, creativity and our concerns as new mothers.

Living in London’s East End with its large population of artists, most without family or community networks, I knew I was not the only artist with a small child in need of support. In July of 2009 I organised our first Enemies of Good Art meeting around that large table. Without an established email-list for this endeavour, I contacted fellow artists, of all ages, with and without children to join me in a round table discussion. I invited the art writer and critic Jennifer Thatcher to chair. At the time Jennifer was not a mother, I thought someone with a more objective perspective might make for a more balanced discussion.

Over 20 women with babies and or small children attended. For our second meeting in the same space we had more than 45 women in attendance, most accompanied by children. From the start we made it explicitly clear that childcare issues should not be a reason for absence. I was convinced that we could hold meaningful conversation around our concerns with our children in tow. This was also a political act, as it became painfully clear to me after I had given birth, that most art and cultural events were now off limits.

We have gone on to host public meetings in several venues: the Turbine Hall at Tate Modern; the ICA, within the installation The Urgent Need to Struggle, by the Russian Group Chto delat (what is to be done?); Chisenhale Gallery; Royal College of Art; at the Southbank Centre as part of the annual international feminist festival – Women of the World; and more recently Tranzit Display Gallery in Prague. Public meetings have been chaired by the writer and art critic JJ Charlesworth; the academic and filmmaker Laura Mulvey and Czech sociologist Jirina Siklova. Meetings are held on a public basis where anyone with an interest in the subject of creativity after having children is welcome to attend and contribute to the discussion. To date, our meetings are predominately attended by women, but a handfull of men have attended some of our larger meetings. Men are not excluded from our events, and we do not advertise them as women-only or feminist gatherings; it is our aim to appeal to all artists. We do however believe that this is a feminist project.

In London, it is increasingly difficult to attend talks, lectures and other events aimed at the intellect, accompanied by a small child. While there are endless art-carts and family rooms in publicly funded spaces such as the Tate galleries, there are no publicly advertised day-time lectures or talks that are child friendly. If at times gallery staff may seem to be sympathetic, the audience most likely will not be. While many artists continue to work on a freelance basis, finding affordable childcare can be as difficult as finding paid work after a period of interruption. Affording childcare to study an exhibition or attend a talk is rarely a possibility for most artists. In November 2010 we initiated a series of public lunchtime lectures with Troika Editions in their small gallery space. This series of lectures was also open to the public, and children were welcomed as part of the audience. This was an experiment on our part to see if we could convince a gallery to work with us, but also to test an audience. Our talks (not to our surprise) were well attended, the children either played with small toys huddled in the corner or listened to the proceedings.

On 1April 2011, we performed our first action at Tate Modern. Our plan was to meet in the Turbine Hall and head straight for our secret location – the Rothko Room. More than 20 women with children ranging in age form very young babies to very active toddlers, gathered in the Turbine Hall to organise our first pop-up crèche. On the day, gallery staff refused us access to our intended space. Instead were invited to use the vast expanse that is the magnificent Turbine hall. Needless to say, this was not an option – for a creche we needed a more contained space, with only one exit we thought the Rothko Room was the perfect location. After much agitated discussion, we eventually settled for a space on level two. We were persuaded by the fact that it was surrounded by glass on three sides, we thought that at the very least our action might be visible. Once settled, we organised ourselves into groups and took turns in looking after the children, so that we might each have a little time to be with the work on display.

In London there are no crèche facilities in any publicly funded art spaces, yet major institutions such as the Tate Galleries, the National Gallery and the Royal Academy to mention a few, actively invite you to take part as a family – with a view to increasing attendance numbers. None actually provide the possibility of you studying the work on display while your child is happily entertained without you in a crèche. If organisations like the Scottish National Assembly and Ikea can successfully operate such facilities, why can’t major art institutions do so? Enemies of Good Art believe that major art institutions should provide such facilities as the norm – we’re not interested in organising and running ‘Big Society’-style do-it-yourself crèches.

During August of 2012 I visited Documenta 13. As circumstances dictated, I travelled with my daughter, who by then was three and a half years old. While being there was an unforgettable experience, I came away feeling frustrated and angered by how little of the work I could study. Not to mention the hostility we felt from the mostly white, serious, middle class, art going audience towards her presence and indeed mine for taking her. As a result, Enemies of Good Art have written to the organisers of Documenta requesting that they consider crèche facilities in the planning of Documenta 14. We are in the process of making the same request to other art institutions.

Through my work on Enemies of Good Art, my primary research suggests that childcare is still a feminist issue, while fears around children as impediments to creativity, mobility and flexibility are major concerns for many practicing artists.

Within the confines of the art world in relation to practicing, committed artists, the subject of the family is still a taboo. Many women artists are deciding not to have children as they feel unsupported at home by partners, and in a more public context by the state and art institutions. The reality of precarious working conditions for many artists compounds the problem. In Britain, the current national gap in pay between men and women is 15%. In London it is 23%. Currently in the UK, 93% of women continue to carry the burden and responsibility of childcare. We pay the highest rate of childcare in London than anywhere else in the world.

Right now we are enjoying a resurgence of feminist activities across the board with regards to issues surrounding the sex industry, unequal pay and domestic violence – to mention a few. While collectives and activist groups campaign for an end to unpaid work within the cultural sector, an end to violence against women and against the sexualisation of women, many activist groups are also looking at the position of the mother and how she might be supported. This is achieved by providing childcare within collective activist spaces and support on the ground during actions and demonstrations. The art world, however, continues to ignore the needs of the artist with children.

Enemies of Good Art held its first international public meeting in Prague in October 2012 and its first meetings in Scotland and in Dublin as part of Visual Artists Ireland’s Get Together 2013. Enemies of Good Art has recently secured a project space in the East End of London. From this collective space housing other activist groups, Enemies of Good Art will run campaigns, continue to research and host events for artists with children present.