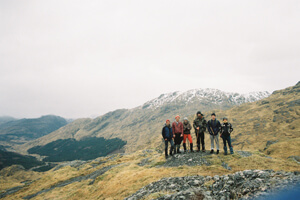 Winter Resort was an artist-led, self-funded expedition, an attempt at an alternative form of artist’s residency. The group comprised Roisin Beirne, Clare Breen, David Lunney, John Ryan, Andreas Kindler von Knobloch and Tom Watt. We traveled to the Scottish highlands in March 2013 carrying all of our food, clothes and equipment on our backs, navigating through the mountains using map and compass and staying in mountain bothies.

Our intention was to travel with no materials for art making, so that the collective encounter with an isolated environment and the venture together into the unknown would become the subjects of the event.

Although I had visions of myself working on the mountain – vague, half formed impressions of sculptures, paintings or interventions in the epic landscape, expanding on the work made at the first Resort residency (www.apopulardestination.wordpress.com) – the reality proved much more mundane. The sheer physicality of the trip, the emotional strain and the shared nervous energy and anxiety bred a more subtle form of collaboration within the group. I became aware of the artwork inherent in all of our collaborative endeavours undertaken as visual artists.

The journey, the experience and the memory of it became, for me, a work in itself. A work where thinking and companionship were the primary materials and the written text became the only medium through which to express some form of frustrated creation.

Below is an excerpt from a log I kept during the four-day trip:

We are in Corryhully Bothy. The previous day we flew from Dublin to Preswick, then took the train from Glasgow to Glenfinnan and walked 6km to the bothy in gathering darkness.

Planned journey: Leave bothy at 10:30. Walk due north along road, take trail towards Sgurr an Choire Riabhaich (852m), follow the mountain ridge northwest and descend to join a trail that leads to Oban, a bothy by the water. Arrive around 16:00, relax for the evening, make work, possibly swim, enjoy some whiskey and maybe catch a fish for dinner.

Actual Journey: 11:40 – leave Corryhully bothy carrying packs, follow the road toward Sgurr an Choire Riabhaich, take a break along the short walk to the trail. (The pack is heavier than I imagined. I am red and tired and I think my hip might have something wrong with it. Andreas is taking pictures of us, which makes me want to vomit. I am extremely sweaty after 15 minutes.)

12:00 – We leave the road and join a trail, a worn groove along the hill, bald and smooth between stretches of dead yellow grass on both sides. About five minutes along we need another break; we remove jumpers, it’s a difficult climb, the trail zig-zags along the grassy base of the mountain. I panic again about how I’ll manage to go on, but there’s nothing I can do. The mountain above looks enormous.

John walks slowly, with the longest legs and the biggest stride. He seems to take it easy at the back, not pushing himself, quiet for most of the time. Roisin rushes along at the front, often faster than everyone else, sometimes stopping and looking back and waiting for everyone to catch up. Lunney is quiet, walking at an even pace with a stick he made from a birch branch. He is wearing a cotton tracksuit that is constantly slipping down over his bum. Andreas jumps and bounds ahead at the front, setting a very fast pace and sometimes going above and ahead to take photos of the group; he is always ready to go again and has two cameras. He suggests that he climbs to the summit of the mountain and catches up with us later, but the group rejects any suggestion of splitting up. Tom stays behind although it’s obvious he could go faster, probably through some sense of responsibility. He makes little jokes and answers all questions about how far it will be and how difficult it will be (mostly posed by me) in a jovial, positive way. I am the slowest and the weakest and the reddest and the most exhausted. My pack is too heavy and I drink too much water and sweat it all out. I suggest most of the rest stops and take two ibuprofen before we left, just in case.

There is not much talk at the beginning of the journey. I certainly didn’t think this part would be so difficult. John agrees. It was really, really hard work. We sweated but kept climbing and it was tough. A piece of shit climb. Terrible, horrible shitarse climb, up and up and up and up and up…

13:15 – We come across more solid drifts of snow, this time Andreas takes out his bivvy bag, gets in and slides right down along a snow drift in the valley. Something cracks in the group, like an inappropriate laugh. He goes so fast. Everyone looks and laughs and follows suit.

I imagine my body like some huge elastic band stretched to the maximum, rubbery and hard and just on the verge of snapping – my brain intent on keeping everything in check, being aware of the slightest twinge in my hip or ear or toe that might signal some unspeakable, debilitating injury and potentially jeopardise the entire trip. With the sliding and laughing and shouting it felt like the band had loosened. It didn’t spring or snap, just loosened.

Afterwards, everyone was shaky and embarrassed but it was a huge relief.

There’s so much tension in a group of people walking towards somewhere they’ve never been, trusting each other to take care, to get there safely, not knowing where ‘there’ will even be. I thought about my body and my mind. After the sliding I felt a little lighter. Apparently I can literally put my mind above my body, making it do things it doesn’t want to do.

We all read Renee Daumal’s novella Mount Analogue before we left. Daumal writes expansively about the philosophy of climbing, the body in relation to the mountain and the human condition, in a playful, fictional adventure story. I felt, reading the book, that he was the kind of man I’d like to be: attuned to the nuances of his own body, aware of its limitations, always attempting to push himself above and beyond what he thought he was capable of. Probably thriving on adventure. (He was also capable of making profound yet simple and beautiful analogies between the mountain and the human soul at the drop of a hat – an altogether witty, wise and spiritual surrealist – plus he was French: basically an absolute dreamboat.) His advice was this:

“If you slip or have a minor spill, don’t interrupt your momentum but even as you right yourself recover the rhythm of your walk. Take note of the circumstances of your fall, but don’t allow your body to brood on the memory. The body always tries to make itself interesting by its shivers, its breathlessness, its palpitations, its shudders, sweats, and cramps. But it is very sensitive to its master’s scorn and indifference. If it feels he is not fooled by its jeremiads, if it understands that enlisting his pity is a useless effort, then it falls back into line and compliantly accomplishes its task.”

After the sliding, I consciously began to ignore my body’s attempts to “make itself interesting”.

14:00 – We are halfway down into the valley (we made time by sledding). The descent was more tedious, the view got worse, the wind died down, the feet were used in a different way. As we descended, the mountains surrounding us loomed. Just. Huge. We trudged slowly, dwarfed on three sides. Those reading the map seemed to be checking more often, stopping more regularly and for a longer time. Anyone who has used a map in the mountains will understand its awesome inability to convey anything of the expansiveness, vastness, bleakness, or the all-encompassing helplessness of lost(ness).

I am the first to say that we are lost. In retrospect, I can only imagine how irritating it must have been. “Where are we? Are you sure? You don’t know? Do you know? What’ll we do?” I didn’t know; they didn’t know. There’s a river but not in the right place. We see a track but not in the right direction. All the crags, lines, bumps and valleys are wrong. Nothing corresponds and we are alone there, with no phone coverage and dwindling food supplies. (Again, in retrospect, the food we were carrying could probably have fed the group for four days.) I reason quietly to myself that at least it would be fun getting collected in a helicopter.

15:30 – Andreas points out where he thinks we are on the map. We have come down a mountain ridge too early. There are two options: climb up and over, due north to 747m and hopefully rejoin our intended trail; or follow the trail we had found to an unknown building marked on the map by a small square. We decide to take our chances.

16:15 – We keep walking along the trail. It seems endless, every turn reveals another infuriating, jutting piece of land, totally obscuring the view.

17:15 – We see the house, Kinlochbeoraid. Andreas is far ahead, running towards it. It’s a tiny, stone washed cottage with a tin roof, the river snaking down beside it. Everyone inspects the building, the atmosphere tense, nervous. Everyone is silent, eating or changing socks. The house is totally sealed shut: metal barriers locked from the inside blocked all the windows and doors. The front door is metal with a huge bolt and padlock. There is a tiny, dark, filthy shed attached which is open. No one wants to talk; we each look around, coming to our own conclusions.

We have two options:

1: Stay in the house for the night and get up at first light to cross the mountain and try to rejoin the trail

2: Walk through the night…

The full text can be found on the Winter Resort website: www.apopulardestination.com