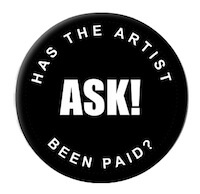 NOEL KELLY, CEO OF VISUAL ARTISTS IRELAND, REPORTS ON HOW THE FINDINGS OF VAI’S SURVEY ON PAYMENTS FOR VISUAL ARTISTS SHOW THE DIRECT RESULTS OF THE CUTTING OF PUBLIC FUNDING FOR THE ARTS.

“We can offer you a token gesture”

These types of statements have become more and more familiar as artists are approached to show their work in exhibition spaces. They have become clichés, and with them comes an expectation of understanding about the plight that venues find themselves in. This is not a new phenomenon but, in recent years, the payment of artists for their contribution to the national exhibition programme has sharply decreased.

With this decrease, Visual Artists Ireland has seen an increase in the number of artists contacting us with stories of being expected to deliver exhibitions and other events such as talks and education programmes either for free or with just their travel expenses covered. It is obvious that this mode of practice is not only inequitable but also fails to recognise the professionalism of visual artists. It has lead to an increase in the number of artists living under the poverty line, or seeking to create new lives either outside of Ireland, or outside of the visual arts sector as a whole.

In October, November and December 2012, Visual Artists Ireland undertook a survey to look at the reality of artists being paid for work and exhibitions. In total, 147 artists who are actively exhibiting completed the survey. The survey took into consideration exhibitions and work in Ireland both in publically funded not for profit spaces as well as the commercial sector.

Not for Profit Sector

In terms of exhibitions in the not for profit sector, this equated to 781 exhibition opportunities realised. We use this term as different artists may have appeared in the same exhibition. The survey asked artists to give details of the exhibition fee that they received from their top five shows in the year.

A total of 580 exhibition opportunities were captured in the artists’ top five exhibitions. 79.66% of these provided no fee to the artist for their participation. Further figures indicated that production costs were not met in many cases, and in a large percentage (43.3%) of cases, artists were asked to either pay or contribute to the administration costs of their exhibitions.

Only 29% of the exhibitions provided for installation costs; 77.8% of artists received no fee for education or outreach programmes. Of these 31.9% received a contribution towards travel expenses for these events.

These figures speak for themselves. To give the artists’ own perspectives we are also including some case studies at the bottom of this document, with comments directly from the artist involved.

The financial reality of exhibition spaces and visual artists needs to be taken into consideration, especially in comparison to the state funding received by other art forms.

Visual Artists Ireland also asks that urgent attention is given to the level of funding being made available for exhibition production in publically funded spaces and the provision of payment rates for artists.

We also ask that spaces in receipt of public funding are required to show meaningful payments for artists who contribute to their programme, and that this payment should be guided by the contribution of the visual artist as the key member of each exhibition team. This form of analysis needs to be fed back to central government for consideration as they allocate funds during the budgetary process.

In setting the level for payments, we see a case for the creation of a national scale. It is not adequate to take this figure as a proportion of programming budget. To take different situations into consideration, the national scale could be prepared as a percentage of the overall turnover of the institutions involved, and that it is proportional to the contribution of the artist to the programme.

In addition, there is a need for recognised daily rates for production and creative time costs, with further exhibition and education / outreach fees being set based on a similar recognised national scale.

VAI has provided the detailed report to the Arts Council for their consideration and to look at options that will change the environment in which we have found ourselves regarding payments.

Age group 55 – 64, with a job to subsidise their work as an artist, with studio rent, heat, and electricity costs of between E250 and E299 per month had four solo exhibitions and six group exhibition in 2011 / 2012. Out of these, three of the solo exhibitions had no artist’s fee, and one provided E500. Out of the six group exhibitions (six plus artists in show), one offered a fee of E700. No production costs were paid, but the galleries covered the administration costs. One show was in an Arts Council and Local Authority funded space, one exhibition was in a non-artists’ space, and eight were in Arts Council only funded spaces. The maximum fee of E700 was received from an Arts Council only funded space. Installation costs were fully funded, but no venue offered travel expenses or took into consideration the production time required to prepare for the exhibitions. They received an extra fee for a speaking engagement, but also had to cover travel and subsistence expenses for this.

Age Group 35 – 44, with a job to subsidise their work as an artist, with part time access to a studio, studio rent of between E100 and E149 per month. Had one solo exhibition and eight group exhibitions in 2011 / 1012. The solo exhibition had a fee of E1000. Out of the eight group exhibitions, one offered a fee of E200. No production costs were paid. Some galleries covered the administration costs but some were paid for out of the artist’s own pocket.

Artist Comments: “In all cases, I have had to borrow money in order to fully realise the exhibition and always end up using the artists fee (if any!) to purchase materials needed for the installation.”

Age Group 45 – 54, full time professional artist, with part time access to a studio, studio rent of approximately E50 per month. Had three group exhibitions in 2011 / 1012. They were not paid for any exhibition. Some production costs were paid, and in all cases administration costs were covered.

Artist Comments: “I have willingly exhibited without fees in emerging spaces (those with no or little public funding) as the situation was made clear from beginning. Spaces that have established funding, even in time of cutbacks, should assign (even small) fees from their budget. Clarity of information about all aspects of the “exchange” between artist and gallery are of great importance. Unfortunately this often revealed only when a problem arises, with assumptions a main cause.”

Age Group 22 – 34, part time professional artist support practice with other work, with no specific studio space or set up works from home. Had three solo exhibitions and eight group exhibitions in 2011 / 2012. They were paid for E150 for one of the group exhibitions. Some production costs were paid, and they were asked to contribute to the administration costs through their own money and money received through an Arts Council grant.

Artist Comments: “Making my work and exhibiting it forces me to go into debt. I wouldn’t mind breaking even, then I would be very happy. I don’t necessarily want to make a profit from my art practice but running up debt is making it extremely difficult for me to survive.”