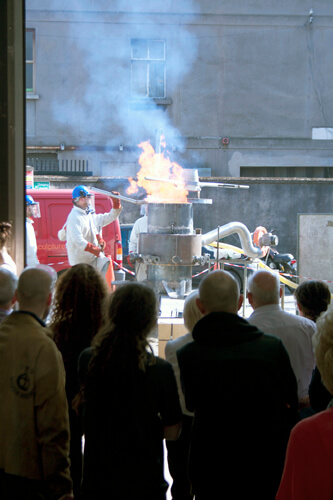 JAMES L HAYES DISCUSSES HIS ‘IRON R RESEARCH PROJECT’, WHICH TOOK PLACE AT THE NATIONAL SCULPTURE FACTORY, CORK, IN MARCH 2012, BRINGING TOGETHER ARTISTS, STUDENTS AND SPECIALISTS TO ENGAGE IN THE UNIQUE CAST-IRON PROCESS

Have you ever wondered how to turn a ton of rusty scrap iron consigned to the scrap heap into 50 unique artworks in under a week? During the last week of March 2012 at The National Sculpture Factory in Cork, eight contemporary Irish Artists and 18 Fine Art Students from CIT Crawford College of Art and Design and the Coleg Sirgar (formerly the West Wales School of the Arts), did exactly that, over a period of five days. The project was part of a research project funded by CIT Crawford College, and facilitated and hosted by the NSF.

I began developing the ‘IRON-R Research Project’ a number of years ago after an invitation was extended to me by Professor David Lobdell at The New Highlands University in New Mexico. David initiated the celebrated ‘Iron Tribe’ happening, during which artists, students and university professors collaborate to produce small festivals around iron pours. These gatherings explore aspects of ritual, performance and communal participation, whilst producing often hundreds of cast iron sculptures over a number of days.

Captivated by the level of enthusiasm and energy surrounding this almost obsolete process of iron casting, I began applying for funding from the Arts Council, my local authority (CCC) and my own Institution (CIT CCAD) in order to research these events and their related sculptural practices. In 2007, I attended the US / UK International Iron Sculpture Symposia in New York, and in 2008 I was invited to take part in the 2nd Biennial Western Cast Iron Conference in Denver, Colorado. I always envisaged the construction of my own furnace here in Ireland, with the hope of joining Ireland up with this global iron- casting movement that began in the US over 30 years ago.

The iron casting process had also found its way back into my practice. I received a commission from Cork County Council in 2010 and was asked to respond to the former military installation at Fort Camden in Crosshaven. I created a series of works that involved the removal of found, disregarded scrap iron from the site. I re-melted it down to produce a series of dinner plates and objects that were then returned to the site and installed alongside some remaining furniture in Fort Camden’s kitchens and barracks building. With that project firmly in mind, and after taking a number of years to concentrate on other large-scale projects within my practice, I applied for a research grant made available by the CIT Research Office and supported by CCAD. I secured enough funding to build a furnace and possibly hold a small iron-casting event in Cork. I then proposed collaboration with The NSF, whose working ethos and dedication to sculptural practice can be aligned with my own. ‘IRON-R’ was an ambitious and rewarding project that could not have been achieved without the full and spirited support and funding of CIT, CCAD, the Head Of School Orla Flynn and the great support and encouragement of the NSF Director Mary McCarthy, who saw the depth and dimension of the project from its inception.

Part of my proposal included working with former colleagues Andy Griffiths and Bob Booth, who run the Sculpture Department in Coleg Sirgar, and are also dedicated to developing underused iron casting technologies. I then opened up the project to the wider community. Through an open call, artists were asked if they would like to work with this largely forgotten medium and process in new and contemporary ways. We were looking for artists who would engage with our students in the hope of encouraging a cross pollination of ideas between artists of differing stages in their careers. Dawn Williams, Curator at the Crawford Gallery, assisted myself and David ‘Dobz’ O’Brien, Programme Manager at the NSF, with the selection process. We selected eight artists from a number of disciplines, from recent graduates to more established practitioners, and also involved eight students from Wales and 10 students selected from the undergrad and post grad programmes at CIT CCAD.

Next, we needed to build our cupola (furnace) and procure the enormous amount of materials required to supply 30 plus artists making moulds and iron sculpture for five days. Ordering some of the specialist materials was complicated: finding borosilicate lenses to attach to the cupola, and finding someone in Europe to sell us the small amount of foundry coke we needed to run our furnace proved particularly difficult. In addition, we needed two tons of silica sand, a ton of foundry coke, 1.5 tons of scrap iron (which needed to be broken up and sorted by hand into usable sizes for melting!), two large-scale industrial fans to act as blowers, ladles, shanks, refractory, a bespoke tool kit, parting powder, sodium silicate etc. I also needed to design and construct a furnace. The nervous anticipation began to build as I tried to ensure it would work as intended. The contacts and connections I had made while in the US, alongside my colleagues in Wales, were a great support during this period. In January 2012, we began the construction of our furnace, the bulk of this work being done by the Technical Manager of the NSF, Donal Dilworth, who constructed the shell of the furnace in no time at all. It was then that we felt the entire project coming together.

I wanted to involve a number of colleagues I had met in the US over the last five years. I Invited Professor Matt Toole from Savannah College of Art and Design, Georgia. I met Matt on numerous occasions while at events in the US and had recently been invited to work with him on a project in Savannah after completing an exhibition in New Orleans. Matt came over as an advisor to the project and worked tirelessly with our students. He brought with him a contagious energy and enthusiasm for iron pouring.

On 25 March our event began. Andy Griffiths opened the morning by giving a profound lecture on the history of the international iron cast movement, its aims and objectives. This movement has no barriers in terms of the sharing of information and knowledge and is all about forming an inclusive, supportive network. His talk, ‘Iron Fever: The Metallurgy and Magnetism of Cast Iron’, was a fantastic introduction to all who were taking part and really set the tone for the week. We then gave demos in the CO2 sand moulding process, and artists and students began to mingle and discuss their intended projects.

During the next couple of days, everyone wrestled diligently with their newfound mould-making techniques. On Wednesday evening, Professor Matt Toole gave his keynote address ‘Ferrous Communitas – The IRON People’ on the people and histories of the movement and the generation of its performative sphere, in which Matt is the leading light. He spoke about some of his monumental performative iron pour works dating back to early 2001, which are not for the faint of heart or the overtly diligent health and safety officer.

Thursday morning arrived very fast and preparations began to fire up the furnace for the production of iron: pour teams were assembled, tools gathered, leather aprons, jackets and helmets were put on. We loaded our furnace full of foundry coke, prepped our charges of smaller foundry coke and broken scrap iron. After three hours of heating up the furnace with a propane gas blower we were able to run it with a double air blower – this being enough to take the internal core temperature to approx 2500oc – and we could begin to charge the furnace and produce our own iron. 30 minutes after the first charge, we cracked the spout and, with much delight from an assembled audience, began to decant 120 lbs of molten cast iron.

Filling all the participants moulds took us seven hours of hot and heavy work. By the end, we had produced a total of 1400 lbs of molten cast iron and filled 50 plus moulds. Amazingly, we achieved a 98% success rate of casting into the moulds. The next day (Friday) was spent knocking out the sculpture from the sand moulds, and tidying them up a little. Then came the monumental clean-up that only iron pours require. In the afternoon we organised a quick review of each work in a ‘pop-up’ style exhibition at the back end of the NSF.

The previous Monday we had four tons of sand, some coal in a huge sack, and a large metal tube on legs with some really big fans attached. Somehow (after an intense few days that went by in a blur) we had an engaging collection of sculptural objects in a makeshift exhibition. Everyone was in a bit of a daze, both fatigued and euphoric, due not only to the tiredness and sense of achievement brought on by the epic weeks work, but from the unique style of artistic ‘alchemy’ that only iron pouring can bring.

James L Hayes is a contemporary visual artist and lecturer in fine art at CIT Crawford College of Art and Design. Hayes has recently been awarded a number of significant commissions for large scale, site specific public artworks across Ireland and has exhibited both nationally and internationally.