SUE MORRIS DISCUSSES A RESIDENCY SHE UNDERTOOK AT AIR KREMS, LOWER AUSTRIA, IN NOVEMBER 2012, AND THE EXHIBITION THAT FOLLOWED ON FROM THIS EXPERIENCE.

I was awarded Artist in Residence at Krems, Lower Austria, for the month of November 2012. This came about through an exchange programme initiated by John McHugh, director of Custom House Studios, Westport. Artists who had staged an exhibition there the previous year were invited to put forward a proposal to the selection panel in Krems. In exchange, Custom House Studios reciprocates by offering a residency to an Austrian artist. The AIR Krems scholarship includes an apartment / studio and a stipend of €1,000. This offered a unique opportunity to step away from my normal day-to-day responsibilities for a sustained period of time and avail of the space and all-important funding to re-examine my art practice. AIR Krems is located in a reclaimed factory on Krems’ ‘art mile’ and within close proximity to several galleries and museums. With views from my studio / apartment overlooking the Danube on one side and the Justizanstalt Stein prison complex on the other, it made for an interesting and thought-provoking juxtaposition between the expansive and the contained, a conflict of ideas that has long informed my art practice.

AIR Krems offers five international residencies running concurrently and across disciplines. This contact with other artists provided much welcome interchange to offset the many hours spent working and reflecting in solitude. I particularly enjoyed the company of Iosif Kiraly, a visual artist from Romania. Our conversations and occasional jaunts and expeditions together made our residencies less solitary, and we have maintained contact since returning to our respective countries. The residency is exceptional in the support and facilities offered to artists, with a friendly administrative / curatorial team on hand, which I think was crucial to the development of the artists’ projects.

Shortly after accepting the residency, I was offered an exhibition at the Kunstverein Galerie in the Viennese suburb of Baden bei Wien, so I decided to travel to Vienna a week before the residency to visit the gallery, survey the exhibition space and meet the director, Cornelia König. The exhibition was to take place three weeks into the residency. Given the short time span and bearing in mind that installation would most likely take a few days, Cornelia and I decided that I should send over some work from Ireland to lessen the pressure and constraints of having to produce work for the show. Having made that decision, my approach to work at my residency studio could be open ended, transitory and experimental, responding to my new surroundings. This left me free to focus on process rather than outcome.

It is amazing how quickly and easily one can establish a new routine and become immersed in work when the conditions are right. Having spent a day unpacking and rearranging the studio / furniture and two days on a drawing that proved to be a false start, I took a deep breath of Austrian air and launched into new and exciting work. Hortus Conclusus (enclosed garden) explores notions of constriction and growth, order and entropy, particularly within the dynamic of the domestic space. Contrary to notions of the garden as a tranquil place, this virtual garden is imbued with a sense of claustrophobia, containment and i 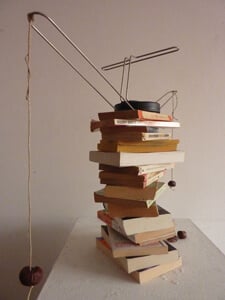 nevitability. I set about making a ‘forest’ of columns of white wool, hung from ceiling to floor with wire hoops. I installed them in the second bedroom of the apartment rather than the studio area for a number of reasons. Firstly, the room provided a sense of confinement while the small divan in the corner, dressed in white sheets, signified the domestic in this strange, semi-transparent, dreamlike forest-scape. Furthermore, both the room and bed provoked a sense of scale and, from my lofty eyrie in the mezzanine bedroom, I was able to look down onto the work through the railings adjacent to my bed.

Living and working in the same space allowed me to jump out of bed, grab a bowl of muesli and launch straight into work while still in my pyjamas. In the evening, sitting with a cup of tea when the working day was finished, I would notice a quirk in the architecture that would set off yet another line of thought. Time and space, both physical and metaphysical, seemed to dissolve. I rooted through cupboards and drawers for nails, string, paper clips and Blu-tac, and began to find tantalising traces of past residents: assortments of condiments, utensils, books, board games, tubs of unidentifiable granules and seeds, a collection of TV aerials, and other ephemera shed light on personal, cultural and artistic values and differences.

Informed by conversations with the AIR Krems coordinator, Sabine Gueldenfusz, I became interested in and intrigued by previous resident artists, particularly those who were accompanied by their children. This offered parallels to my own situation as a mother and an artist. AIR Krems is quite unusual in that it facilitates artists with domestic responsibilities and welcomes spouses, partners and children. I was becoming aware of the increasingly fluid boundaries between my work, the domestic space and its detritus. Since collecting and foraging forms an intrinsic aspect of my art practice, I took the opportunity of making use of some of these disparate objects and elements to conjoin them in a series of ‘domestic interventions’ or ‘transformations’. An old chessboard with missing pieces was reinvented as a game of levitation (Time, Motion, Suspended). A floral candleholder became one with an iron (Homage to my Mother), a clothes-drying rack supported a set of pegs and a small rubber ball, arranged to suggest table football, which took its place by a window in the hallway with a view of the prison (Mother and Child) and a ‘rabbit’s ears’ TV aerial (with suspended conkers) was perched on a stack of books (Monument to Days Gone).

In his novel, The Quiet Twin, Dan Vyleta observes that, “It is a curious fact of acoustics that a toilet plunger, skilfully waved before the open bell, can transform the trumpet’s sound into that of the human voice”. These transmutations can also occur for the visual artist. Bringing found objects together in new ways, sometimes with fabricated elements, can transform their significance and lend them a different emotional or dynamic resonance – an evocation of time or place, or of a particular person or personal relationship. Lithuanian writer Rolandas Rastauskas said, “We travel to not only see new places… but to see ourselves as something other, to shed our skins of deeply engrained habits… and what do we find at that magical destination? Our old selves no doubt”.1

Before the residency, my art practice explored dynamics within the domestic space – particularly the female experience and its complex relationship to the world. My multiple roles as mother, artist and teacher necessitated an element of separation between these domestic / artistic / pedagogical selves. But in Krems, working and living in the same space, freed from everyday constraints, these delineations began to blur, merge and finally dissolve. My work became the domestic space, and the domestic space became my work. That ‘magical destination’ was indeed my old self but in a space transformed and unified. As the political theorist Antonio Gramsci observed, “The starting-point of critical elaboration is the consciousness of what one really is, and is ‘knowing thyself’ as a product of the historical process to date, which has deposited in you an infinity of traces, without leaving an inventory”.2 Since returning home from Austria, I have been thinking about my own new ‘starting-point of critical elaboration’ within my art practice and the need to think about these vestiges in my work as interrelated, the need to draw them together and compile my own ‘inventory of traces’. Of all the insights I’ve taken from my residency at Krems, this has been the most valuable.

Sue Morris is a graduate of the Royal College of Art, London. She practises from The Model Studios, Sligo. Her residency was funded by an AIR Krems scholarship. The exhibition ‘Hortus Conclusus’ at Kunstverein, Baden bei Wien (24 Nov – 3 Mar) was funded by Culture Ireland as part of the International Cultural Programme for Ireland’s Presidency of the EU. It was transferred to museum ORTH where it will run until 23 Jun.