QUESTIONING VIEWERSHIP |  JOANNA HOPKINS, 2012 WINNER OF THE VAI & DAS RESIDENCY AWARD, DISCUSSES HER EXPERIENCE OF THE RESIDENCY AND THE WORK SHE CREATED USING THE FACILITIES OF DIGITAL ART STUDIOS, BELFAST

Like most artists I know, I’m an avid reader of Visual Artists Ireland’s weekly ebulletins and I first saw the new Visual Artists Ireland and Digital Art Studios Residency Award advertised through this. At first, I wasn’t sure if there was a catch amongst the list of benefits: a free studio space, free camera and equipment hire and the potential of an exhibition. Would I end up at a crossroads somewhere between Belfast and Limerick handing over the deeds to my soul? I applied for the residency via a simple online process and was delighted when I was awarded the residency for October 2012 – January 2013. (I promptly remembered I’d actually sold my soul a few years ago for a doughnut, so it all worked out well in the end.)

My application for the residency outlined my intention to develop and create a short film as part of my current work practice exploring the theme of augmented reality. Through video, installation and interactive work, I had been exploring augmented reality technology and associated research about how the advance of this technology affects the way we are developing, changing and learning as a society. I saw the VAI / DAS residency as an opportunity to continue to develop work exploring how new technologies are changing the way people think, act and perceive both themselves and the world around them. My proposed film would form part of an interactive installation that I was developing. The equipment and facilities awarded by the residency would allow me to develop professional, high quality pieces of work for public exhibition.

I started the VAI / DAS residency in the middle of October 2012, and right away there was an abundance of workshops that were available to residency members free of charge. I decided it was in my best interests to sign up for each and every one. The most beneficial aspect of the residency was the availability of numerous and diverse workshops, through which I learned new skills and upgraded my existing skills.

Ben Jones ran the first workshop, on Adobe Final Cut Pro. Having only worked in Premier Pro before, I had some familiarity with the basics, but through this workshop I realised my working methodology in video editing systems was a little too ‘organic’ and caused problems and inconsistencies when it came to exporting high quality videos. Each DAS residency comes equipped with individual workstations, featuring a lovely big, shiny iMac loaded with Final Cut Pro and the entire Adobe Creative Suite. I was able to play around and hone my skills on Final Cut Pro and various exporting systems, so that I could strengthen my grasp on producing more professional video and film projects.

When I have a question or query, usually my most trusted resource is the web – or my dad of course. The benefits of the former is that its first response to every question isn’t “What have you broken now?” While instruction videos, comment feeds and information boards are relevant and useful, this residency reminded me just how beneficial person-to-person teaching was – especially in relation to immediate discussion of troubleshooting and problems. DAS also limits each workshop to a small number of participants, resulting in very productive, time-efficient one-on-one learning.

Other workshops included Digital SLR filmmaking techniques with Jennifer Atcheson. This was a huge benefit to my practice and featured hands on and first person tutorials on the Canon 5D MKII, which I had never used before. Very quickly I got hooked on to the quality of image and feel of these cameras for filmmaking. DAS also has a range of high quality lenses for shooting with which give a clear, filmic image, attractive depths of field and greater scope for image control.

As a DAS resident I was also able to hire out the cameras and equipment from DAS’s candy store of filming and recording equipment for free for certain periods of time. I’ll admit that I became a little weak at the knees when I realised I was able to rent out the professional Canon 5D MKII to complete my long awaited work, without having to completely drain my meagre self-funded project budget.

The workshop room at DAS was also available to rent for free and that is where I filmed my video piece What We See. This enabled me to work with studio lighting and external sound recording for the first time. I also hired actors – on a limited budget – and developed my skills as director, camerawoman, and sound and lighting manager, working within a controlled studio environment.

The DAS studios are packed with studio lights, an a 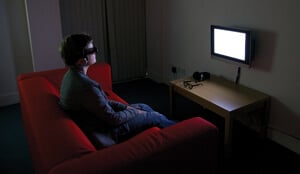 bundance of tripods to suit every job, a professional-level Sony HVR-A1E and Canon XF305, Canon 5Ds, various high quality lenses, sound recording equipment and last but not least massive boxes of various wires, connections and adapters that would make the Studio Manager and Assistant weep when I uttered the phrase “do you have…?”

Even if you are not a resident of DAS, the organisation offers extremely competitive rental rates on all their equipment, workstation and studio hire. I intend to avail of this after my residency. If you become a member of DAS, you are offered further reductions on the rental costs of equipment. Other workshops I completed through the residency included a Flash Animation workshop with Barry Cullen and an Adobe Illustrator Skills Workshop with Wendy Williamson. Through these design-based workshops and the time afforded to me through this residency, I was also able to complete the administration and design side of my main art project work, by completing and publishing my website (www.joannahopkins.com).

DAS Studio Manager Angela Halliday also gave an informative and inspiring workshop on Digital Installation Skills. Both Angela and Studio Assistant Catherine Devlin offered help, information and advice on all the equipment and editing facilities at DAS. They were extremely helpful and supportive, answering any questions I had, and with trouble shooting in relation to project ideas and execution. They were also extremely forthcoming with baked goods such as scones and doughnuts, which is always a welcome addition to any residency.

The residency concluded with a week-long exhibition by all residents and an artist talk on the final evening, organised by the staff at Digital Art Studios. My fellow residents and I – photographer Fergus Jordan and visual artists Ailise O’Neill and Andrew Martin – created an exhibition space within the DAS studios and workshops showcasing the video, photographic and installation work we had each developed through our residencies.

I exhibited my finished piece of interactive video installation, What We See. This installation consists of an invisible screen, a special pair of glasses to view the screen and a replica of the set it was filmed in. The viewer is invited to place themselves within the film set of the video, by sitting in the set and watching the screen through the glasses. The sound is created in stereo headphones, left to right, to induce the sense that the person on the screen is speaking into your ear on your corresponding side. By viewing themselves mirrored in the artwork, viewers are invited to question the validity of their own ‘viewing’ – ie the ways by which they see things and the ways in which they believe what they see. The work aims to question ideals of viewership. The film / installation set incorporated visual clues relating to my ongoing research interests and inspirations for this project: posters of the film They Live (1) and the television series Black Mirror (2) and copies of the books Psychology for Dummies (3) and Life on the Screen (4).

The awarding of the DAS and VAI Residency has had a hugely beneficial impact of the quality of work I am now able to create. As a result of this residency and the work I researched and produced here, I will have my first solo exhibition at Catalyst Arts Project Space (27 May – 9 June 9 2013). I have also been offered a second residency in Belfast, via a joint venture between PS2 Belfast and New Lodge Arts.

I would like to thank Noel Kelly, Visual Artists Ireland, Angela Halliday, Catherine Devlin and the Board Members of DAS, for allowing me the opportunity to avail of this residency and the assistance that was offered to me throughout. I also wish the future recipients of this valuable Residency Award the same professional development it has benefitted me.