Robert Rauschenberg once proclaimed that the second half of the twentieth century was no time to start drawing on rocks. In spite of his early misgivings towards Lithography, he became one of the most innovative and prolific lithographers of the modern era.  In one of Dublin’s oldest districts a new Lithography studio is aiming to re-establish one of the oldest forms of fine art printing in the Irish arts landscape.

Lithography is a two hundred year old form of printing which hinges on the principle that oil and water do not mix. The name lithography comes from lithos, stone, and graphia to draw and was invented in Germany by Alois Senefelder around 1796.

Starting with a hand-drawn image by the artist on the stone using a greasy crayon or liquid drawing medium, an oil-based variety of ink is then rolled directly onto the stone which immediately bonds with the equally greasy crayon lines. Water is then sponged onto the remaining undrawn areas to discourage the ink from spreading to the non-image areas. A sheet of paper, preferably one with a high cotton content, is then placed over the entire stone.

The stone is then passed through the printing press to transfer the image from the stone to the paper. This process is then repeated with a fresh stone for each subsequent colour required, building an image colour by colour and creating complex colours and textures as the inks trap into each other.

Located in the heart of Stoneybatter, Independent Editions was set up with the intention to popularise and demystify lithography which has in the past been compared to Alchemy. Michael Timmins the owner and printmaker behind this endeavour claims that “this comparison is confusing and serves to complicate something which ultimately is very simple, I will work with artists through each of the various stages of making a lithograph from drawing materials to fixing the image to the stone to printing an edition”. 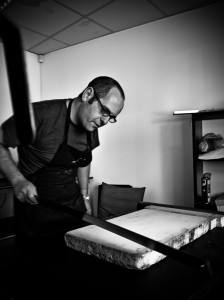 Independent Editions is a collaborative studio where artists who wish to make a lithograph can come and work, they concentrate on the creative aspects and Michael Timmins will take care of all technical considerations . Michael claims that this will suit many artists and printmakers who like the mark-making effects of the medium but would rather not get into the technicalities of the process, “Lithography is a very hands-on and immediate process where the fast turnaround from creating the image to printing the edition means artists have a satisfying experience and leave with a very saleable and valuable edition of prints”.

As part of Independent Edition’s ambition to raise the profile and and practice of this currently under practiced form of printmaking there is a comprehensive range of training courses available at the studio. These workshops and training courses are primarily aimed towards individual artists who wish to understand the medium better and become proficient enough to eventually create and print their own work, the studio is then available as a resource for this work to be carried out. To date a number of successful courses have been run with students at all levels of proficiency and they have been extremely well received. One recent course participant has gained a level of confidence through completing a range of training that he is now working independently with the Studio resources to create his own edition.

Michael also intends that the studio will publish work by Irish artists. In the coming year Michael will be inviting a range of active Irish and visiting artists to collaborate with the studio to make one or a series of prints over a specified time frame, all costs are covered by the studio who are fully responsible for selling the prints. When production costs have been recouped all profits are split equally between artist and studio.

All work carried out at the studio happens within a very strict ethos of quality and best international practices. Highly influenced by his time training at the Mecca of lithographic printmaking in the Tamarind Institute in New Mexico, US, as well as his relationships with other leading european print studios Michael Timmins is focused on delivering an exceptional level of output from the studio.

In accordance with this ethos all work editioned at the studio is fully documented and all stones and plates used in the edition are effaced after editions are completed. Documentation is provided on purchase of prints as proof of authenticity that the print was created and hand pulled in the traditional manner. Independent Editions uses
the most lightfast inks available and prints on high quality rag papers.  Michael says that “In a time where people are used to seeing prints created and printed digitally I think it’s really important that this traditional craft is practiced at a high level so that we can demonstrate the genuine and unique look and feel of a hand pulled lithograph in
comparison to electronically produced prints” 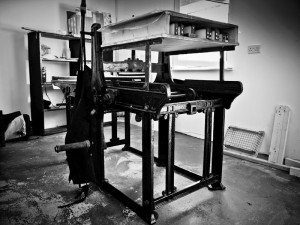 Michael Timmins studied printmaking at DIT graduating in 1999 with an Honours Degree following this in 2000 he joined Black Church print studio and soon after joining became the technician at the studio he worked there as both artist and technician learning lots from the various members and mediums he encountered. The set up of Independent editions came about as an indirect result of workshops given to Timmins by Clare Carpenter in 2002 who was then teaching Lithography at the National College of Art and Design it was through these workshops that Timmins became obsessed with Stone Lithography and its many markmaking possibilities.

In 2007 Timmins was selected to take part in the prestigious Tamarind institute printer training programme in Albuquerque, New Mexico. It was here that he undertook a year long study programme that trained him in all aspects of the Lithographic medium from the technical aspects of Acid Tint to the setting up of a commercial print studio the course consisted of long days of workshops tutorials and printing sessions that lasted into late evening. Tamarind’s two-part printer training program is designed for students who wish to pursue careers as fine art collaborative printers. This intensive, full-time program concentrates first on strengthening and refining the lithography student’s technical skills, then on the application of those skills to collaborative projects. Timmins completed the programme in 2008 and landed a job at Landfall Press in Santa Fe, one of the oldest and best print studios in the US printing works for artists such as Claes Oldenburg, Christo, Vito Acconci, and Terry Allen. It was here that Timmins gained further knowledge from Jack Lemon Steve Campbell and Stephen Britko and got to see how a commercial printshop is run.

It was these experiences on the other side of the Atlantic which planted the seed in Timmins head which has resulted in the setting up of this exciting venture, the only dedicated Lithography studio in Ireland.