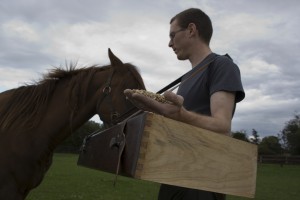 In August 2011 The Leap Inn, Allen, Co. Kildare was inhabited by four artists: Fergus Byrne, Victoria McCormack, Áine Phillips and Dominic Thorpe. I had been granted funding from Kildare County Council to curate a residency in my father’s bar and grocery, The Leap Inn. The artists would be based in the residential section, which has been uninhabited for nearly four years.

At first the aim was simple: give artists time, space and a small fee so they can work. This then developed into inviting the artists to respond to a site: The Leap Inn, the surrounding countryside and the people who frequented the bar and grocery. It was initially kept very open.I had hoped that one of the artists might make some public intervention, but I had to be realistic, we didn’t get all the money we asked for. In the end, all four artists wanted to make work to show.

It was important that this experience was documented, so I invited Jonathan Sammon to do so. We now have a rich bank of images and a video on Vimeo[1]. Jonathan also acted as an advisory to the artists, helping them process this site in a short amount of time.

Áine Phillips knew exactly what she was going to do: she has been researching Ireland’s first cookbook which was written by a woman from Kildare. She wanted to make a book of recipes given to her by people in Allen. She also wanted to do an installation in one of the bedrooms. Dominic Thorpe wanted to try out different things in a space that would culminate in a 24 hour performance. He came armed with hundreds of clocks. Fergus Byrne had been interested in the large bags of oats sold in the shop wanting to explore the oats as both material and object. Victoria deliberately did not want to know too much about the place before she came: as we know each other she was almost too aware of my perception of the place and wanted to experience it for herself. She was drawn to the forested Hill of Allen and was exploring it within hours of her arrival. 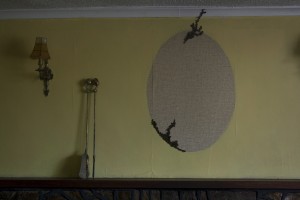 The artists’ stay did not go unnoticed. The process began with my frequent trips home to prepare the space in advance of the residency. The house had experienced some water damage from a burst pipe two Winters before. I also had to make sure that all of my family’s personal belongings were either removed or tidied away. I was aware that my family were placing a massive amount of trust in me. Although attached to a bar, the residential part of the building has always been quite private, with even the great-grandchildren of the family only knowing the downstairs part. This was where my subjectivity came in as well; I have never not known this place, where things are kept, how things are done. It was difficult to envisage how the meeting of my family life and professional life would turn out. It was strange to look at the site from a professional perspective: I have never considered the Leap Inn in terms of aims, objectives, projected outcomes and potential impact before. I have not remained as connected to this place as other family members have. I find it hard to keep track of things that have happened since I left home twelve years ago: my home remains in the past. This residency has changed that: I was forced to see it in the present. I have since come to the conclusion that not every experience needs to be objective in order to be successful.

The group had decided they would do performances on Saturday evening, and have the installations ready for public viewing. Suddenly I needed an audience. Finally the fact that everyone in the village knows me was a good thing.

Áine arrived first, on Tuesday 23 August. I had arranged for her to attend the weekly knitting and crochet group with my mother and sisters, one of whom was home from America with her nine year old daughter, Amy. As I can neither knit nor crochet, and the group stipulates no children, Amy and I were left behind. In the two hours that followed, I was anxious that the women would not like having their group infiltrated by an artist. I needn’t have worried, as Áine came back excited and animated. She had gotten several recipes for her book already, and also inadvertently acted as ambassador for the residency; telling the group what was happening. Áine went on to collect recipes throughout the week, and made a book in my mother’s kitchen on Friday night. Áine’s performance would take the form of a cookery demonstration in the bar. She was unsure what the tone of this would be, but knew that by Friday it would be clear. Each day she learned more about her audience and the context. By Saturday night she knew she was not going to make a recipe from the book, but give the audience one of her own, that was taught to her by her mother. Áine’s performance took place in the upper area of the bar, while in the bottom part the clientele watched the Premiership results on TV. People that she met throughout the week attended as well as people who came to see the other performances and installations. Áine’s installation was a success with our audience. She had amassed a quantity of bra straps from making another piece a few years ago and made them into bats to be hung from the ceiling. Áine saw the girls’ bedroom with its love heart wallpaper and Narniaesque wardrobe as the perfect site.

While Áine and I collected Victoria from the train station on Wednesday  morning, Fergus and Dominic (or ‘The Men’, as my Grandmother decided they were to be called) arrived. It was a strange feeling coming into my parents kitchen and seeing them drinking tea with my sister. We went for a walk up the Hill of Allen. Victoria got straight to work and we returned home with branches and pine cones. Victoria spent the next two days working in the ‘good’ sitting room, making a measured and aesthetically subtle intervention starting in the fireplace and spreading out. There was an oval shape on the wall where someone had painted around a mirror rather than removing it. Victoria began by embellishing this with pinecones, creating a definition around this forgotten space. 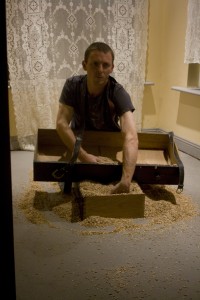 ‘The Men’ had decided to sleep in the old house as well as work in it. What followed was four days of intense, immersive experimentation and a processing. Fergus continued to work with the oats, and managed to find a livery yard that would allow him to feed oats to two of their horses as part of performative process. Fergus’ actions did not strike anyone as odd, no one questioned him when he arrived with a feeding trough made from an antique drawer. On Saturday evening Fergus worked through a performance downstairs with the drawer, the oats and images of his work with the horses the day before. Upstairs, the audience entered a bedroom with porridge that Fergus had made and an old hymn book that had escaped the clean up and had remained behind. The room used to be the one that my Grandparents’ lodger slept in. Fergus explored this idea of an outsider living within a family construct.

Dominic began his 24 hour performance on Friday evening in the bar by drawing simultaneously on two sheets of paper with both hands. This was accepted as something everyday and normal. Games of darts were played and conversations had while being present with Dominic. He then moved upstairs into my Grandparents’ bedroom. Dominic spent the rest of the night and following day working with the furniture in the room as well as the clocks that he brought. On Saturday I had to work in the bar during lunch, and had the strange experience of watching a rugby match on TV with the locals while knowing there was a performance going on above our heads. Dominic’s performance was an exercise in being absolutely present in a space. Again my cleaning skills let me down as Dominic had found an old photograph of my Grandfather and my uncle as a child. It was a performance that was engaging for the audience but personally very powerful for my family and I. My uncle, who knows Dominic in his other guise as a musician, found it compelling to see this durational work in the room where he was born. I was worried that Dominic would faint, get dehydrated or even worse, decide that the performance was not working. Of course I needn’t have worried, within ten minutes of finishing, he was in the pub enjoying a pint and catching up with friends.

At time of writing it has been one month since the residency and I am still unsure as to how I feel about it. The artists have all remarked that it was a brave thing for me to do; joining my two worlds together without knowing exactly what would happen. It is hard to be objective but it has made me understand that art happens all the time, everywhere, even when you are pulling pints and shouting at the rugby match.

All accompanying images by Jonathan Sammon. This project was supported by Kildare County Council.