‘The Drawing Box’ is the brainchild of Outland Arts member Diane Henshaw (www.outlandarts.org). This collective places an emphasis on sharing skills and ideas with members and non-member artists and the community at large. So it seemed like a natural extension to come up with The Drawing Box, a project that transcends local and national boundaries to connect with artists across the globe.

The form of the project is unusual. It is based on an invite only Facebook group that provides a forum for discussion on contemporary drawing. The group initially comprised Diane Henshaw, Patil Rajendra, Andrew Crane and John Crabtree, but since its inception in December 2012, it has grown to accommodate over 100 artists. Behind the ‘closed doors’ of its Facebook page, members can upload their work, sparking discussion around drawing, and inviting feedback on each contribution. In a social media driven society often saturated with trivial chatter, here is an example of how Facebook can be put to productive use.

The exhibition recently on show at Ranelagh Arts Centre served as tangible evidence of these ongoing discussions and includes artists from many countries. Not only has membership of the group grown, but Ranelagh was only one stop on the show’s global trail, which began in Mumbai, then landed in Enniskillen, stopping in Belfast and Ranelagh before continuing to Kuala Lumpur, the Philippines and a number of other countries, hosted by members along the way.

Five A5 drawings per participating artist are featured in Drawing Box shows, utilising any mode of drawing they wish. This scale of work not only lends itself well to an exhibition constantly on the go, but its lightness and mobility is reflective of the organic flow achieved when works develop in a live forum. The full title of the show is in fact ‘The Drawing Box: An Experimental Socionomic Art Project’ – socionomic relating to the study of how social ‘mood’ regulates social behaviour and, in this case, how these artists influence each other. The essence of this project is fluctuation and evolution. 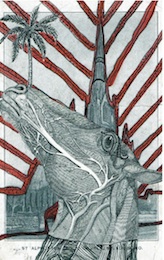 In the Ranelagh exhibition space, groups of five works by each artist – 38 individuals are represented – were arranged across the walls. It’s evident that there is no theme joining the various clusters together, other than a celebration of drawing*. But confining the works to the same number and size per artist creates a sense of boundaries within which individual styles can flourish. It’s also clear that visitors expecting to be met by a room of classic pencil / charcoal drawings, a forgivable preconception, are in for a – hopefully, pleasant surprise.

While artists such as Yashwant Deshmukh (India) do offer slightly more conventional approaches to drawing in pencil on card, Helen Sharp (Ireland) offers us mixed-media print-like collages made on vintage postcards. Reinhard Stammer (Germany) offers us an explosion of coloured paint and mixed media. Kshitish Das (India) creates surreal almost Alice Maher-like figures, with additional limbs or perhaps in some strange state of metamorphosis, using pen and ink with a free hand. The interest in line and contour, and in the latent potential within mark making, is as predominant in one as it is in the others.

A text written for the exhibition by Slavka Sverakova, titled Meditation on drawing a drawing, thrashes out the concepts surrounding the word drawing, and considers its application to both a durational process imbued with ideas and the tangible object / outcome: a drawing. The text invites us to consider the idea of drawing on a broad scale. On my visit to the show I shared a word with Drawing Box member and Dublin liaison Jean Doyle. Doyle hoped the show would help viewers to think outside the (drawing) box, remarking, “What about drawing with scissors?”

This considerable and varied collection of works all declare the pleasure taken by each artist in mark-making in all its multitude of forms and possibilities. The works certainly encourage viewers to lean in close and engage with each individual work. But one can also take a step back and consider the concept as a whole – the strengths of this ever expanding, internationally diverse group connecting artists, showcasing ideas and technical approaches from across the world. ‘The Drawing Box’ exhibition is evidence of a secret conversation between artists, inviting us to imagine how this dialogue influenced the final works as we see them. We’re prompted to consider all the thoughts and actions behind the marks on paper, to look beyond the immediately visible to the underlying source processes.

Roisin Russell is a writer based in Dublin. Her writing has featured in Paper Visual Art Journal and Circa online.