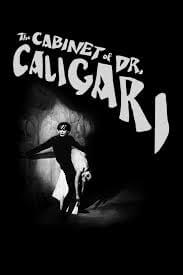 Visual Artists Ireland in collaboration with The Market Studios Presented a screening of The Cabinet of Dr. Caligari on the 30th of October at 6pm.

The Cabinet of Dr. Caligari is a 1920 German silent horror film directed by Robert Wiene from a screenplay by Hans Janowitz and Carl Mayer. It is one of the most influential films of the German Expressionist movement and is often considered to be one of the greatest horror movies of the silent era in film.

The screening was introduced by Executive Director of The Market Studios Deirdre Morrissey and studio member Eimear Tynan and was followed by an informal discussion and networking opportunity. Free popcorn and fizzy drinks were available to all on the night.

The event was held at the VAI Office, Central Hotel Chambers, Dame Court, Dublin 2. The evening was free for both VAI and Market Studio members to attend.

For more information on the event, please email: adrian@visualartists.ie