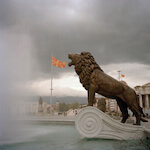 As a joint initiative between the three organisations, the award’s aim is to recognise and support the development of promising and committed visual artists in Ireland. The winner receives 5,000 to supplement and assist in the production of new work for a solo exhibition at Wexford Arts Centre. As the recipient of the award, Jurisic will create a new body of work throughout the period of January – December 2015, to be exhibited in January 2016.

Jurisic predominantly works in the medium of documentary photography and her work often focuses on the notion of exile and its subsequent effect on memory and identity. Her most recent body of works, ‘YU: The Lost Country’ (2010 – 2013) was originally conceived as ‘a recreation of a homeland that was lost’, that homeland being Yugoslavia, the country in which Jurisic was born and which disintegrated in 1991. Retracing the steps of prolific Anglo-Irish writer, Rebecca West, in her book, Black Lamb and Grey Falcon, Jurisic attempted to ‘re-examine the conflicting emotions and memories of the country that was’, through photography and text, identifying what felt so familiar but yet very distant.

For further information on the artist or the Emerging Visual Art Award please log onto www.wexfordartscentre.ie/award-winner-2014.html