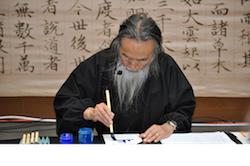 Explore the four treasures of East Asian Calligraphy in this weekend workshop at the historic United Arts Club in the heart of Georgian Dublin. Over the weekend you will practice the three major forms of characters, formal, semi-cursive and cursive script, learn the etymology of the words and the source of the language in pictograms and ideograms.

Kazuaki Tanahashi, Sensei is a world-renowned calligrapher, painter, Zen scholar and author of Buddhist texts. He has led workshops throughout Europe for the past three decades. He is also known for his peace activism and is a Fellow of the World Academy of Arts and Science. Christine Renden Haggarty is a Zen practicitioner, artist and instructor who lives in Northern California. Over the past 20 years she has been practicing East Asian Calligraphy and has studied with several Asian masters.

The day’s activities will include a short meditation, readings of Zen texts and calligraphy practice in both black ink and watercolour. The cost of the workshop is 220 euro with all materials included.

To sign up for the workshop contact Grainne Carr, grainnenollaig@gmail.com or call 0872233379.
For more information about Kaz and Christine go to www.brushmind.net. and www.zenbrush.net.